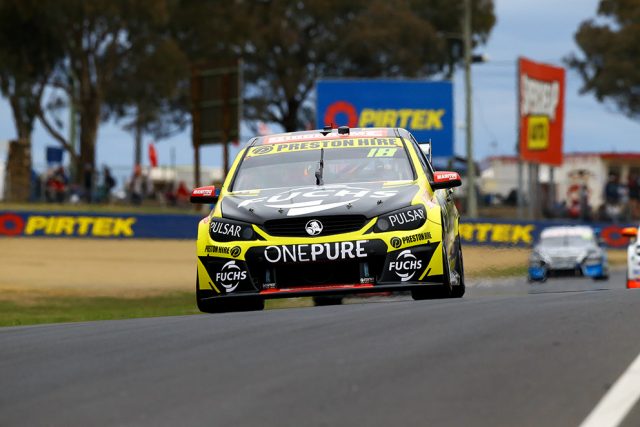 Preston Hire Racing set the pace in the morning warm-up ahead of the Supercheap Auto Bathurst 1000.

Officials declared the track wet, despite the session being held in overcast conditions, allowing teams to run on rain tyres in anticipation of showers later today.

A handful of teams including Shell V-Power Racing, Nissan Motorsport and Tekno Autosports scrubbed in sets of wet Dunlop rubber.

The majority of the field ran through final system checks while completing driver change rehearsals.

Jamie Whincup bedded in a new engine in his Red Bull Holden after undergoing several changes overnight. The #88 Commodore ended the session fourth.

“We replaced a lot of things. We did an engine, we did a few different things,” said team manager Mark Dutton.

“We’re obviously looking for speed, we didn’t think there was anything wrong with the engine as such, but you can’t be sure with these things; we’ll double-check on the dyno when we get home.”

Nissan Motorsport’s Michael Caruso/Dean Fiore entry was fifth ahead of the David Reynolds/Luke Youlden Erebus Holden that will start from second on the grid.

Pole-sitters Scott McLaughlin and Alex Premat were 16th on the timesheets.

The session ran without incident.

Today’s Great Race is scheduled to start at 1110 local time.