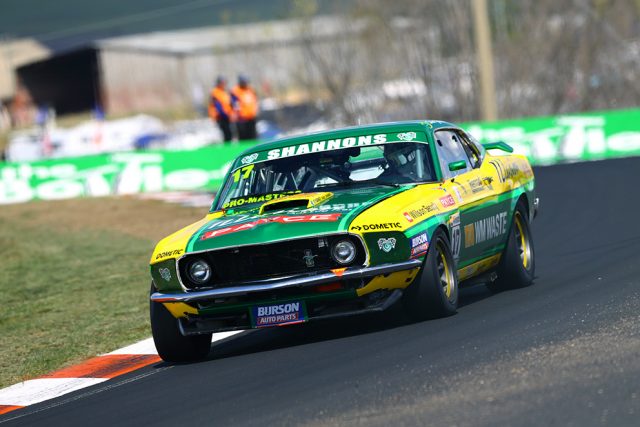 Steven Johnson and Eddie Abelnica have shared race wins in Round 6 of Touring Car Masters at Mount Panorama.

Johnson won a relatively straightforward Race 2 in the #17 Mustang Fastback, leading all the way from pole position.

John Bowe ran second most of the way and while he broke the lap record in the #18 Torana SL/R 5000, the two-time Bathurst 1000 winner did not seriously threaten Johnson at any stage. Abelnica (XB Falcon Coupe) won the Trophy Race from 16th on the grid, having executed an impressive move on then-leader Cameron Tilley (Valiant Pacer) into The Chase on Lap 5 of 6.

Bob Wisely’s weekend is over already after a high-speed impact when he Torana A9X turned right and into the wall at the end of Conrod Straight in Race 1.

“I came over the little crest and the wind buffet or the side draft from Tony K’s (Karanfilovski) car got me and it just turned,” Wisely told Speedcafe.com.

While Wisely was unharmed, the car has been withdrawn for the rest of the weekend due to damage to the oil pump shaft. 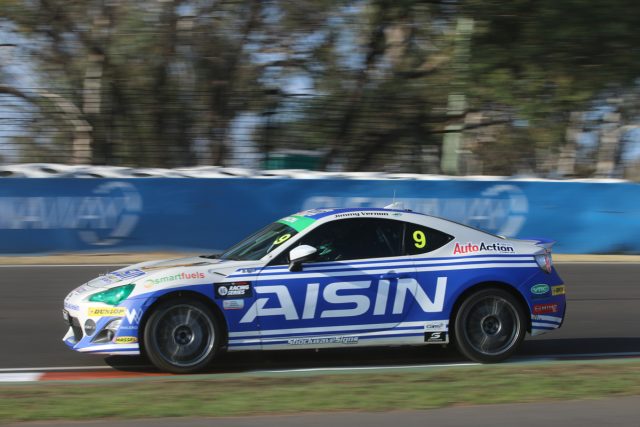 Series leader Jimmy Vernon and Dylan Gulson have each taken a race win in a shocking day for another series contender, Cameron Hill.

Hill had appeared to have taken an easy win in Race 1 but was subsequently excluded for a parc ferme infringement, handing victory to Vernon.

Worse was to come in Race 2 when Hill was caught up in a multi-car collision partway up Mountain Straight in Lap 1.

Cameron Crick appeared to move across on Aaron Seton before the rise in the straight, causing himself to be turned into the side of Tim Brook as they ran three-wide.

While Seton escaped, both Crick and Brook ended up in the wall, and Hill incurred frontal damage which proved terminal, despite the pole-sitter’s attempts to press on.

Moments earlier, Aaron Cameron headbutted the wall at Hell Corner when he overcorrected after a nudge from Seton.

Gulson, who got the jump at the start, had to hold off Vernon at the end of the race to take the win.

David Brabham finished 15th and 10th in the two races, and Leanne Tander 14th and 13th. 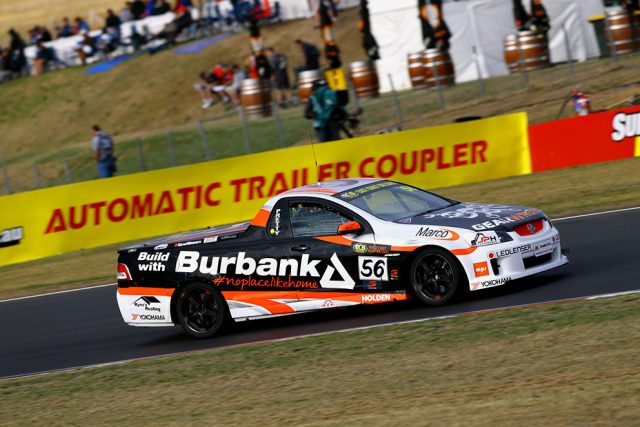 Nathan Pretty has won Round 4 in a one-off start thanks to another victory in Race 3.

The Burbank Homes Commodore opened up a handy lead on the opening lap and stayed clear for the duration of the six-lap race.

Ryal Harris finished the race in second and leaves Bathurst with a three-point advantage in the series over previous leader Kim Jane, who was third.

Earlier, New Zealander Matt Spratt won in the Australian series for the first time in the reverse grid race.

Spratt started from first on the grid and pulled away to a 4.5s lead when a failure for Marcus Zukanovic brought out the Safety Car.

Blake Sciberras elbowed past with a bold move into Griffins when the race restarted.

However, he ran wide at Murray’s at the end of the lap, and Spratt made sure to hang him up on the kerb on his way through as they bumped again.

Second position was, nevertheless, Sciberras’ best result in the category to date.