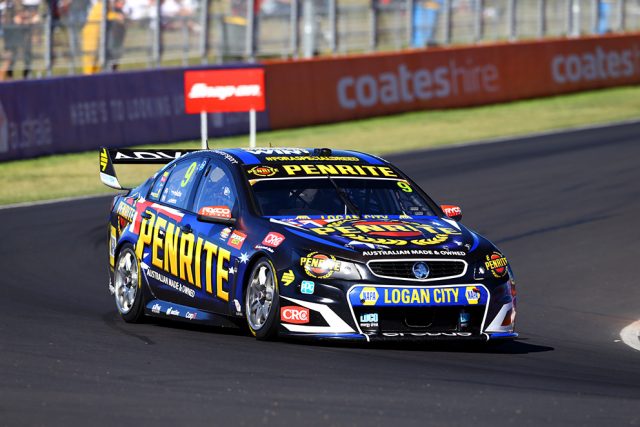 David Reynolds posted the fastest time in Practice 6 for the Supercheap Auto Bathurst 1000.

The session was however declared a wet session to allow teams to use wet tyres in anticipation of forecast rain for tomorrow.

A final full practice offered teams the chance to cycle through co-drivers and practice driver changes ahead of Sunday’s race.

Teams to appear in the this evening’s Top 10 Shootout also used the dying minutes to conduct a qualifying simulation.

Practice 6 came to a premature end with two minutes remaining after Taz Douglas (#3 Lucas Dumbrell Motorsport) found himself beached in the gravel at Hell Corner, which prompted the red flags.

James Courtney fired into second spot late in the session with the Mobil 1 HSV Racing driver 0.04s adrift of Reynolds.

The #97 Red Bull Holden of Shane van Gisbergen and Matt Campbell was third ahead of Chaz Mostert in the #55 Supercheap Auto Falcon.

Mark Winterbottom ended up in fifth while Scott Pye was sixth in the #02 HSV Racing Commodore.

The two Shell V-Power Racing Falcons were outside of the top 10 with the #17 of Scott McLaughlin and Alex Premat in 12th spot, while the #12 of Fabian Coulthard and Tony D’Alberto was 13th fastest.

The session was also red flagged after 21 minutes when Nissan Motorsport’s Michael Caruso locked a brake and tagged the wall after running on at Hell corner.

Caruso stopped on track which prompted the stoppage to retrieve the stricken Altima, which suffered a broken lower arm in the rear of the car.

“(It was) a silly mistake, I tried to keep the speed up to get out of the sand trap and not get stuck in there, but obviously slapped the concrete,” said Caruso.

The car returned to the track to claim ninth ahead of the repaired #34 Garry Rogers Motorsport Holden of James Moffat and Richard Muscat.

The full Bathurst 1000 grid will be determined following the Armor All Top 10 Shootout at 1710 local time.