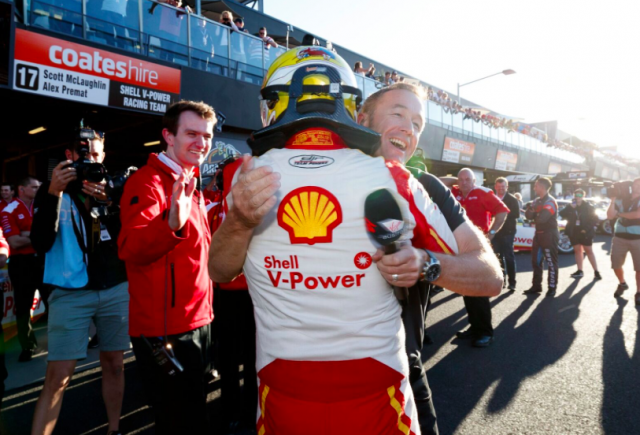 Scott McLaughlin says his blistering Bathurst pole position lap shouldn’t be considered the new ‘Lap of the Gods’ but admits it is the best moment of his career to date.

McLaughlin recorded the fastest ever Supercars lap at Mount Panorama to secure the Armor All pole position for Sunday’s Supercheap Auto Bathurst 1000.

The Shell V-Power Racing driver blitzed the 6.2km circuit to log a 2:03.8312s effort as he stunned the opposition to take pole by 0.4s.

It was made even more impressive after an untidy second sector highlighted by a mistake at McPhillamy Park.

The lap has since been dubbed by some in the paddock as the new ‘Lap of the Gods’ in honour of Greg Murphy’s famous 2:06.8594s then record effort in 2003.

McLaughlin admitted the lap was in his mind when he crossed the line having long looked up to the fellow Kiwi.

The 24-year-old admits his lap was special but it will never take over Murphy’s mantle.

“I don’t want to say that (it is the new Lap of the Gods),” McLaughlin told Speedcafe.com.

“I’m happy to take a little side step from that and we were both there or thereabouts.

“It shows how far our cars have come in the years between Murph’s lap and my lap.

“I’m three seconds faster, it is pretty special, but what he did with H pattens, I will never forget.”

McLaughlin says the moment has surpassed his greatest achievement in motorsport but says he remembers little of the actual lap itself.

“It is by far. I mean my first ever V8 win was pretty special but that was pretty incredible,” McLaughlin added.

“It will never get out of the top five whatever I do in my career.

“I remember going off at the top but that was probably about it. I just had a really good run from Turn 1 and I knew I had a the grip to do it.

“I remember looking at the predictors and that is probably why I don’t remember much of it.”