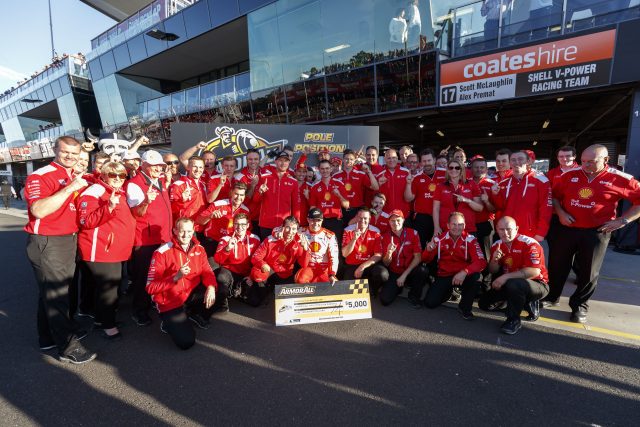 Scott McLaughlin delivered a devastating fastest ever Supercars lap at Mount Panorama to secure the Armor All Pole position for the Supercheap Auto Bathurst 1000.

Last out in the Top 10 shootout, the Shell V-Power racing driver produced a stunning effort to log a 2:03.8312s to claim pole psoition.

The feat was made even more impressive after an untidy second sector that saw the Kiwi ran wide at Skyline and over the kerbs at the Esses.

Despite the error he was three tenths ahead at the second sector before guiding the the Falcon home to pole.

“Thank you so much, oh my God. I dreamt of doing this since I was a kid.” said an emotional McLaughlin.

His effort surpassed David Reynolds by 0.4s after the Erebus Motorsport driver produced an impressive lap which looked to be a contender for pole.

Prodrive’s Mark Winterbottom laid down a marker for pole position as he lit up the timing screens to post a 2:04.49s which featured an impressive 50.69s first sector.

The effort stood until Reynolds took to the track leaving the 2013 Bathurst winner in third position.

Chaz Mostert claimed fourth ahead of Shane Van Gisbergen, who had set the tone by becoming the first to clock a lap in the 2:04s bracket in the session.

Prodrive’s Cameron Waters was sixth in front of the sister Shell V-Power Racing Falcon of Fabian Coulthard, who managed to secure seventh despite running wide at The Cutting.

The top 10 was completed by Jason Bright (Prodrive), Garth Tander, who set a strong initial pace by clocking a 2:05.32s, and Mobil 1 HSV Racing’s James Courtney.

The entire Supercars field will return to the track on Sunday for a 20 minute warm-up at 0805 ahead of the Great Race, which will start at 1110 local time.