Macauley Jones breaks through in Bathurst 250

Macauley Jones breaks through in Bathurst 250 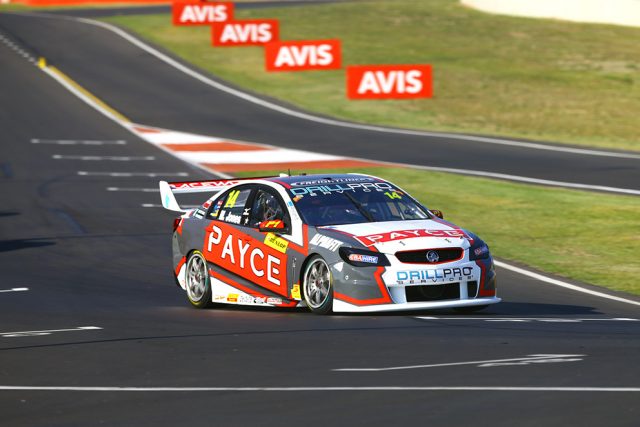 Macauley Jones has taken a first ever Dunlop Super2 Series race win in the Bathurst 250 at Mount Panorama.

The second-generation driver took over the effective race lead in the pits under the first Safety Car and remained there as those behind fought amongst themselves.

Paul Dumbrell (#88 Eggleston Motorsport VF Commodore) made a strong start from third on the grid, splitting the front row and leading through Hell Corner.

However, he lost the lead when he locked the left-front at Hell Corner and ran through the gravel trap on Lap 4, falling back to eighth.

Dumbrell regained one of those positions before losing two more when he ran up the run-off road at the same place on Lap 8.

At the front, the gap between Hazelwood and Le Brocq ebbed and flowed before the latter began to lose pace.

Hazelwood’s lead got out to three seconds when the Safety Car was called on Lap 13 for the stricken Matt Chahda (#18 The Chahdas VF Commodore), who had run off into the gravel at Murray’s Corner.

Dumbrell, who had got back to eighth due to Jack Perkins (#4 Dragon Motor Racing VF Commodore) touring the dirt at The Chase, assumed the lead as the only car to not pit.

A fast pit stop put Macauley Jones (#14 VF Commodore) into second, ahead of Le Brocq and Hazelwood, while Fullwood dropped to 14th as he waited a lap to pit.

Dumbrell took a margin of exactly 0.7s across the stripe at the restart, and he used the clear air to open a gap over Macauley Jones approaching two seconds before pitting at the end of Lap 22.

Fullwood, who had risen to sixth by that time largely off the back of car pace, but also penalties for some of the back-markers and Will Brown’s call to pit at the critical lap (Lap 19), followed Dumbrell into the pits and jumped ahead with a shorter fill.

Just as they took service, Chahda came to a stop on the edge of Conrod Straight, bringing about a second Safety Car period and prompting the rest of the field to make their final pit stops.

The race restarted on Lap 27, and Macauley Jones skipped to a 2.5s lead when a Hazelwood error bottled up the chasing pack at the end of the lap.

Hazelwood locked a brake into The Chase, causing Le Brocq to run through the grass when he stayed wide to avoid contact from behind.

Andrew Jones took over second position, from Le Brocq and Hazelwood, and held up the #28 Altima for a number of laps.

By the time Le Brocq found a way past at Griffins on Lap 32, Macauley Jones was six seconds up the road.

The Nissan driver chipped away at the lead, but never looked like having enough laps to catch the Payce Commodore.

Macauley Jones took the chequered flag almost four seconds ahead after 39 laps, the race cut two laps short of its scheduled distance due to the two Safety Cars.

“I have been dreaming of this for a while,” said the 23-year-old.

“The car was really good and the pit stops were even better; I can’t thank the team enough.

“Bathurst, I have been coming here since I was a kid with my dad and watching him for a long time.

“To have him here and the whole family really, it is awesome.”

Father, and team owner, Brad Jones was similarly emotional after a tough year for BJR in the Virgin Australia Supercars Championship and Super2.

“It is fantastic to get a result and Macca and (engineer) Andrew Edwards and all the guys from the Dunlop Super2 Series work so hard on that car.

“It is good, it feels like we have turned the weekend around a little bit; hopefully it is the start of an upturn on the weekend.”

Andrew Jones managed to just hold out Hazelwood in the latter stages before the new BJR co-driver sailed off at The Chase on the final lap.

Hazelwood nevertheless held onto fourth, ahead of Will Brown and the Kurt Kostecki/Jake Kostecki pairing (#55 Kostecki Brothers Racing VF Commodore).

Dumbrell finished seventh after being taken out by Fullwood on Lap 33.

Fullwood had attempted to pounce at Hell Corner when Dumbrell was held up by Hazelwood at the end of the preceding lap, but locked the rears, hit car #88, and caused both to spin.

Fullwood finished 13th after being hit with a 15s time penalty for his indiscretion.

Perkins and Chahda were the DNFs, the former due to a power steering problem.

The Dunlop Super2 season will conclude at the Coates Hire Newcastle 500 on November 24-26, when the series will race for points again.