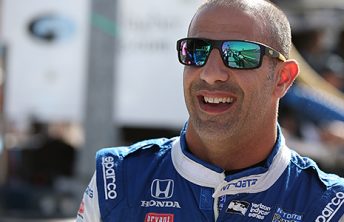 Tony Kanaan has signed to drive for AJ Foyt Racing from next year’s Verizon IndyCar Series as part of a ‘multi-year’ deal.

Kanaan will enter his 21st season in IndyCar or CART with the Chevrolet squad.

“It’s two legends together,” said Kanaan in reference to Foyt’s four Indianapolis 500 wins as a driver.

“Even before I ever considered driving for him, he was saying nice things about me, like it would be good in the old times and that I reminded him of himself.

Kanaan himself has won the Indianapolis 500 once, in his last season with KV Racing in 2013 before joining his previous team, Chip Ganassi Racing.

He therefore becomes Foyt’s first full-time driver who has won an Indianapolis 500.

The Brazilian will drive car #14, which was steered by Carlos Muñoz in 2017.

The identity of the driver of car #4, which Conor Daly drove this year, has not been announced.

Kanaan finished 10th in this year’s IndyCar series with a best result of second place at Texas Motor Speedway.