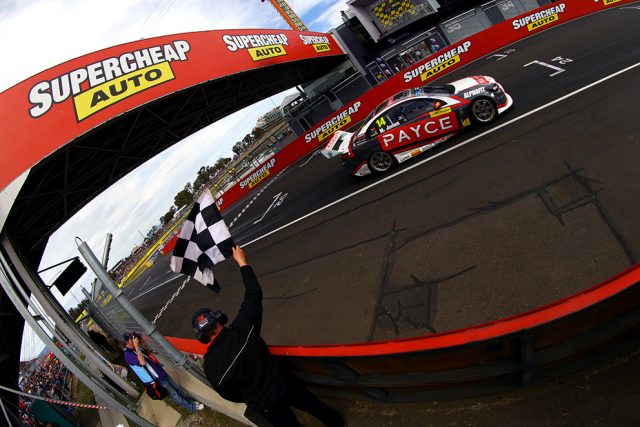 Brad Jones has expressed his pride after son Macauley Jones won a Dunlop Super2 Series race for the first time at Mount Panorama.

The result was also a welcome fillip for Brad Jones Racing after an extremely tough season for the team across both tiers of Supercars, that continued through the opening days of the Supercheap Auto Bathurst 1000 weekend.

The win is the Albury team’s first in a Supercar at Bathurst after debuting in the Virgin Australia Supercars Championship in 2000, and comes in Macauley Jones’ fourth season in Super2.

“I am so excited that he has got his first Super2 win and even moreso that it is here at Bathurst.

“It is the most amazing joint to race around and to win races here is very, very difficult so it is a great moment.”

Macauley Jones reflected emotionally on a family achievement, including being joined by team-mate and cousin Andrew Jones on the podium.

“I am feeling awesome at the moment,” he said. 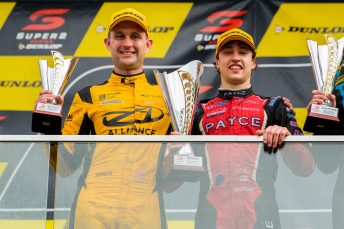 Andrew and Macauley Jones on the podium

“My sister was down there and to have Andy up here was awesome as well.

“And to see my dad down there… this is a place he has always talked about winning and going well at.

“I got to hug him after the race and hear the quiver in his voice; he was tearing up a little bit, which was cool to see.”

BJR’s weekend had got off to a bad start when Tim Slade hit the wall at The Esses in Supercars Championship Practice 1, necessitating an overnight rebuild of the #14 Freightliner Commodore.

Those setbacks came after just commissioning a new car for Bathurst due to Todd Hazelwood’s horror crash which wrote off a chassis at Sandown.

The Albury squad had also been forced to build up two new Commodores for Super2 in April following a Symmons Plains pile-up.

“It has been a pretty tough year and it has been a tough weekend to be honest,” Brad Jones continued to Speedcafe.com.

“To come up with a win on the Saturday is certainly a good start. We have a pretty big day coming up tomorrow and it gets the whole team a bit upbeat.

“Everyone works pretty hard on every facet of the team; you saw how the whole team was out cheering when he crossed the line and when Jonesy came third and we had a one and a three.

“That is where we are a tight knit group, that will give everyone a lift and I think it will give Macca a bit of confidence going into tomorrow.”

Macauley Jones and Nick Percat are the highest placed BJR pair on the starting grid for tomorrow’s Great Race, with the latter qualifying the #8 Boost Mobile Commodore 14th.