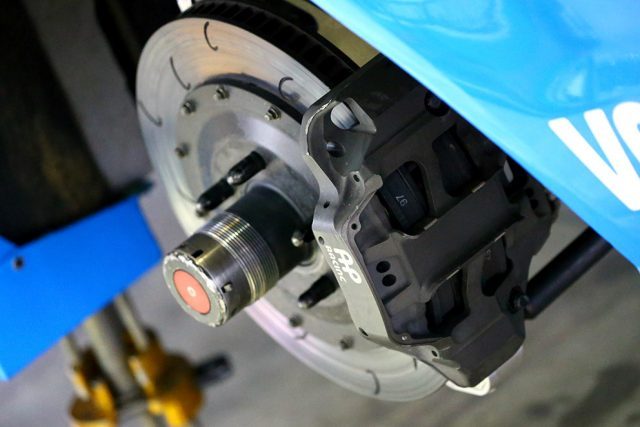 A number of Supercars teams have changed brake pad manufacturer amid safety concerns following reports of cracks on rotors during practice ahead of the Supercheap Auto Bathurst 1000.

Supercars has sent a note to teams with information of the issues encountered by a portion of the paddock when using PSC brake pads on the latest specification AP Racing disc, that is being used for the first time at Bathurst this year.

Teams currently use PFC 01 or Project Mu brake pads with the choice purely down to driver preference.

AP Racing has produced a modified disc design as a response to the failure suffered by Mark Winterbottom at Bathurst last year.

Triple Eight has fitted the Project Mu pads on all three of its cars ahead of qualifying yesterday following the concerns with the PFC pad/AP Racing disc combination.

“AP (Racing) couldn’t tell us why, so we had to go the safe option.”

“There are some issues up and down pit lane…..but for safety for us going into the race on Sunday, we have to swap over and get on with it,” added Craig Lowndes when speaking to Fox Sports.

Prodrive has followed suit this morning with all four of its entries changing brake pad supplier.

The Ford team has decided to err on the side of caution.

“We obviously got caught out with the failure here last year and even though we’re not seeing any issues at the moment if other people are it obviously makes us nervous,” Prodrive boss Tim Edwards told Speedcafe.com.

“So we’ve obviously got to take a conservative approach and if the 01 pad, which is what we use, as a lot of pit lane, is a contributing factor then we need to do what we can to avoid it.

“We’re going to change to the Project Mu pads.

“Supercars have advised us that there’s been no cracks in any rotors in the teams that are running that pad. That’s the best advice we can go on. There are no other options.

“This is what Supercars has done is advise us that there are some cracks, so we’ll just need to take a conservative approach because we don’t want to get caught out like happened to Frosty last year.”

It has been confirmed to Speedcafe.com that some teams are continuing to use the PFC pads including Nissan Motorsport which encountered cracking following the Sandown 500.

“We had a couple of small cracks at Sandown, which we weren’t too concerned about but AP sent them off back to England,” team manager Scott Sinclair told Speedcafe.com.

“We haven’t had any issues this weekend. We’re running status quo at the moment.

“We’ve got a mixture across the two cars of the two-different pad spec.

“As it stands now we obviously analyse the wear and condition of the rotors and everything after Sandown and at the moment we’re happy to push on as-is.”