Whincup: We have to maximise final practice

Whincup: We have to maximise final practice 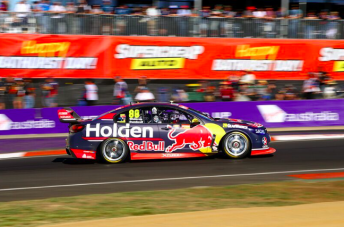 Jamie Whincup believes there will be a greater emphasis on Saturday’s Practice 6 after admitting his car was down on pace in all three sectors at Mount Panorama.

The six-time Supercars champion will be a notable absentee from tomorrow’s Top 10 Shootout after finishing 11th in this afternoon’s qualifying session.

Whincup has struggled for outright pace at the 6.2km circuit today having been only 14th fastest in morning practice and almost a second adrift of Shell V-Power Racing’s Scott McLaughlin in qualifying.

The 34-year-old also endured a challenging qualifying that produced uncharacteristic moment at The Chase that saw the Holden run through the gravel trap.

Whincup also refused to blame the late red flag, caused by James Moffat, for hampering his chances in the session.

Although unconcerned to be starting Sunday’s Great Race from 11th, he is eager to find answers to his lack of pace.

“We’ve got to try to find some pace in Practice 6, maximise that one and then roll on Sunday,” said Whincup.

“There’s no point of going into detail of where it (the car) is (lacking), but looking at the sector times, we’re down everywhere.

“We’ve done heaps of race stuff and I’m confident we’ve got a good race car, at least in the dry.

“If it’s going to rain all day (on Sunday), it doesn’t matter, though, but we want to know why we didn’t go quick.

“That’s what I want answers for, and then we’ll fire in the wet set-up for Sunday.

“It’s amazing, it’s not much and ‘boom’, you’re out of the 10. That’s the reality of this game, it’s crazy competitive, which is great for everyone involved.

“It sucks for us when you miss it slightly, and over a big, 6km lap, that equates to a lot. That’s that.”

Meanwhile, Whincup, who last missed the Top 10 Shootout in 2014, says he wasn’t surprised by the pace at the front of the grid.

“We didn’t nearly maximise. Some days we sit here and go ‘how in the hell did they do that?’ but today wasn’t one of those days,” he added.

“If we got everything right we would have been down in the low 2:04s for sure.”

The Supercars field will return to the track on Saturday morning for Practice 6 at 1010 local time.