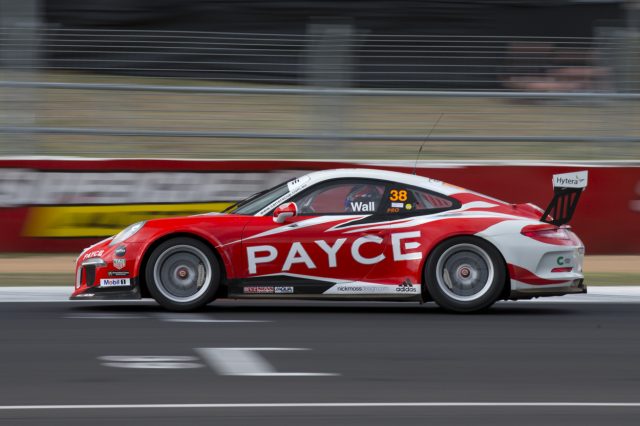 David Wall’s hot form in the Carrera Cup at Bathurst has continued with a lights-to-flag victory in the opening race of the weekend.

The race, which also doubled as the second event in Porsche Endurance Cup, got underway in dramatic fashion with Wall heading the field into Hell Corner while Sonic Motorsport team-mates Nick McBride and Andre Heimgartner banged wheels. That allowed Alex Davison into second before a heavy crash to Tag Heuer Carrera Challenge racers Stephen Grove and Max Twigg at the exit of Griffin’s Bend.

The race was put under Safety Car for five laps before Wall had to fend off a determined Davison over the following laps. The pace remained throughout the race, with Wall edging away.

The race broke into several battles with Cameron McConville making way by Jordan Love, before a James Abela pushed to hard trying to pass Love at Murray’s corner. Love was sent down the escape road, with Abela handed a 15sec time penalty.

Time Miles took an unchanged win in the Tag Heuer Carrera Challenge after the demise of Grove and Twigg. Miles winning the semi-professional class from Marc Cini and Graham Williams.

The second race of the weekend for Carrera Cup will be the curtain-raiser to the Top-10 Shootout tomorrow afternoon at 4.30pm local time.