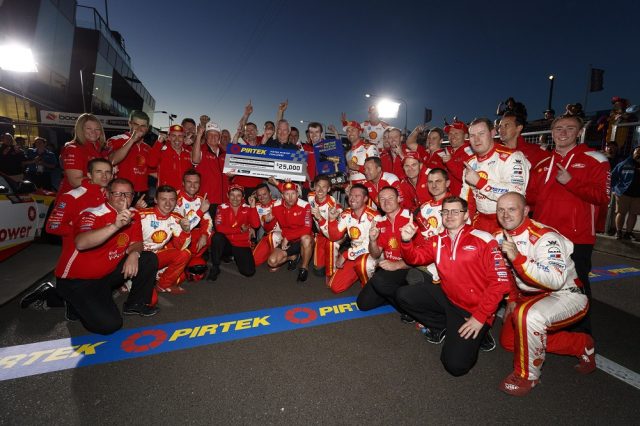 The #12 Shell V-Power Racing Team Ford has come out on top in what was an intra-team grand final in the Pirtek Pit Stop Challenge.

The first semi-final saw DJRTP taking on Nissan Motorsport with car #12 prevailing against car #23, before car #17 beat the #14 Freightliner Racing entry in the second semi-final. 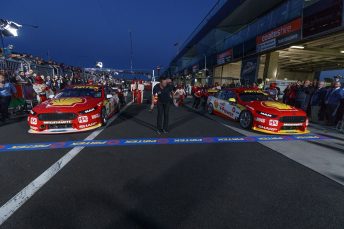 The start of the grand final

Those results guaranteed the Ford squad the $25,000 cheque and their name on the Golden Rattle Gun Trophy, with car #12 first across the line in the grand final, in which the crew was split across both cars.

“It’s just a great night for the boys and they did a ripper job to get both of the cars not only into the top four and to be here tonight, but to win both heats and make it to the grand final’s very special.

“It involved everyone and it’s just a great start to the weekend and we’ll press on.”

Story said that there were already plans for the $25,000 prize from Pirtek.

“There’s plenty of pressure around from the troops to do something with it, so we’ll certainly go direct to the lads and we’ll do something special at the end of the year for sure.”

Car #14 had topped the points table after the Super Sprint rounds which determined the finalists, but a slow left-rear change proved costly.

The result capped off a stellar day for DJRTP as Scott McLaughlin shattered the old practice record at Mount Panorama on his way to provisional pole, with Fabian Coulthard set to join his team-mate in tomorrow’s Armor All Top 10 Shootout.

The Virgin Australia Supercars Championship will be next on track tomorrow at 1010 AEDT/local time for Practice 6.