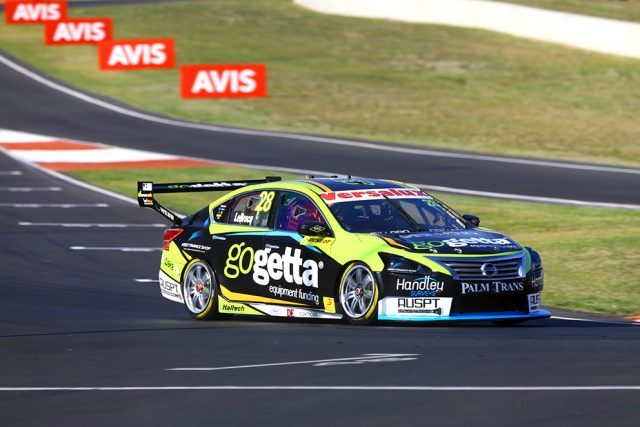 Jack Le Brocq has taken the Armor All Pole Position for the Dunlop Super2 Series 250km enduro at Bathurst with another practice record time.

Le Brocq got his #28 MW Motorsport Nissan Altima all the way down to a 2:05.3898s late in the half-hour session to take his second pole of the season.

The GoGetta-backed driver broke his own practice record which he set earlier in the day in Practice 2.

Le Brocq will start alongside Todd Hazelwood, who improved one position in his final run in the #35 Matt Stone Racing VF Commodore.

Paul Dumbrell, who held the top spot until nearly halfway into the session, was ultimately third-fastest.

The series leader survived a scare when he slid his #88 Eggleston Motorsport VF Commodore over the exit kerb at Griffins Bend, but managed to just stay off the wall.

Macauley Jones (#14 Brad Jones Racing VF Commodore) will also start off Row 2, while Bryce Fullwood (#16 MW Motorsport Nissan Altima) was the other man to lap in the 2:05s bracket during proceedings.

Kurt Kostecki will share his car with brother Jake for the race, though only the former drove in qualifying.

There was a red flag just before the halfway mark when Matt Chahda’s #18 VF Commodore failed to proceed at the exit of Griffins Bend.

The session came to a slightly premature end with another stoppage in the final minute when Jack Smith spun and backed his #21 Brad Jones Racing Commodore into the wall at The Cutting.