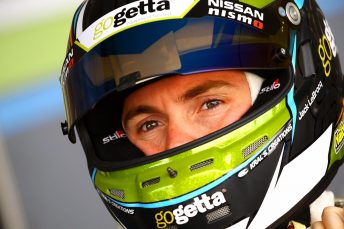 Le Brocq was the first to dip under the old practice record with a 2:06.2032 inside the final seven minutes.

He lowered the time to a 2:05.6465s next time around, knocking nearly 0.9s off Garry Jacobson’s old benchmark set 12 months ago.

Fullwood, who was fastest in Practice 1 a day earlier, went second-fastest late in the session and faster again just before the chequered flag, closing to within 0.3s of his team-mate.

Todd Hazelwood (#35 Matt Stone Racing VF Commodore) glanced the wall between The Cutting and Reid Park halfway through the session, but still went on to take the fastest lap until being bumped by the two Nissans.

Jack Perkins (#4 Dragon Motor Racing Commodore) survived a scare at the top of The Esses before clocking a time good enough for sixth-fastest.

The first third of the session was effectively lost when Matt Chahda hit the wall heading up to Reid Park before any of the 15 cars could set a lap time.

While Chahda drove his #18 VF Commodore away from the scene, he failed to proceed past Conrod Straight and had to be retrieved by the flatbed.

Armor All Qualifying is coming up today at 1505 local time/AEDT.