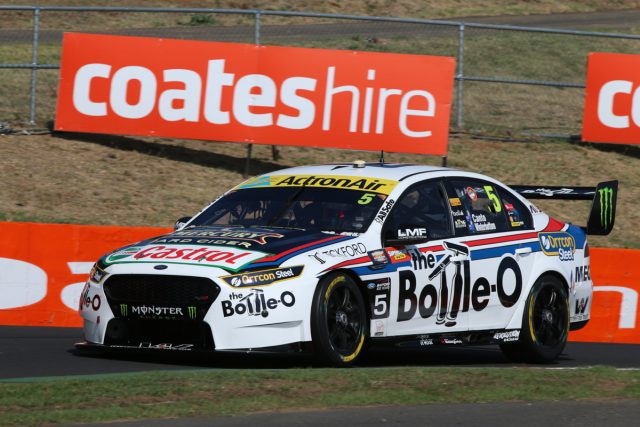 A last gasp effort from Dean Canto put Prodrive on top in a hotly contested co-driver practice session ahead of the Supercheap Auto Bathurst 1000.

Mark Winterbottom’s co-driver put the #5 Allan Moffat liveried Falcon on top for the second time this week after he posted an impressive 2:05.33s effort in the dying moments.

“It is always exciting when you see a five on the dash and then get the call over the radio that you are P1 for the session,” said Canto.

“As co-drivers we are always trying to do out best out there, it is not about being the quickest but it is always nice to be on top.

“We ran quite long in that session with one set of tyres with a high mileage. The car was still good on those tyres, high fives on high kilometre tyres.”

Golding was among a group drivers to improve in the closing stages as the session resumed with four minutes remaining after Taz Douglas caused a late red flag.

Mobil 1 HSV Racing’s Warren Luff held sway for much of the final half hour in the #02 Commodore before being pushed down to third at the chequered flag.

Paul Dumbrell snatched fourth spot in the #88 Red Bull Holden he shares with Jamie Whincup, while Steve Owen, who enjoyed spells at the top of the times, was fifth in the #55 Chaz Mostert Falcon.

Stanaway’s session was punctuated by a moment in the pitlane when his car stalled.

The team were forced to wheel the car back to the garage before it eventually fired up after a suspected air box fire cut the engine.

The Shell V-Power Racing Falcons of Tony D’Alberto and Alex Premat were eighth and ninth, as Macauley Jones rounded out the top 10 in the #8 BJR Holden.

Steve Richards was 13th fastest in the Commodore he will share with Craig Lowndes, while the repaired #97 Red Bull Holden driven by Matt Campbell claimed 16th spot.

Andre Heimgartner finished the session in 24th after taking over the #14 Commodore from the injured Ash Walsh.

The session was red flagged after 23 minutes when Chris Pither locked a brake and found himself beached in the gravel trap at The Chase in the #99 Erebus Motorsport Holden.

Pither returned the track to end the hit out in 22nd spot.

Practice 4 was halted for a second time with six minutes remaining when Douglas locked the rear wheels of his Lucas Dumbrell Commodore and spun into the gravel trap on the exit of Murrays corner.

Primary drivers will jump back in the cars for Practice 5 at 1140 local time.