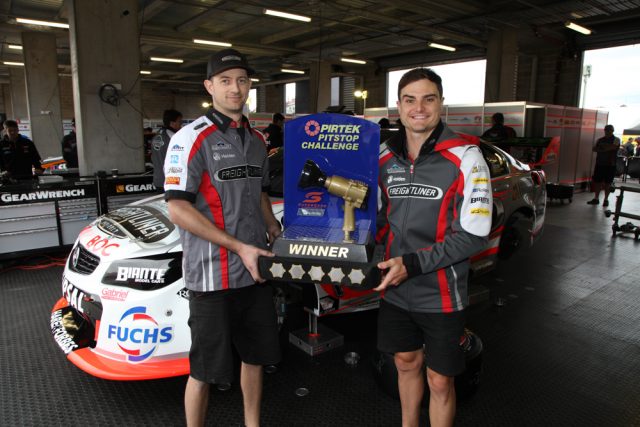 Brad Jones Racing will compete tonight for a $25,000 prize and the Golden Rattle Gun Trophy as part of the Pirtek Pit Stop Challenge, after rebuilding the #14 Commodore overnight.

The BJR crew were forced into action when Tim Slade hit the wall at The Esses and The Dipper during Thursday morning’s Practice 1 session, ruling the Freightliner car out for the rest of the day.

Car #14 was the first qualified car for the four-car finals series, and Slade and the car’s number one mechanic Sam Cosgrove were given a sneak peek at the Gold Rattle Gun this morning.

The prize is an opportunity for pit crews to share the spotlight on live television during Supercars’ biggest weekend of the year.

“They have done an amazing job,” Brad Jones told Speedcafe.com.

“The whole team, especially the guys who look after the car, Rob and Sammy, and the fabricators, Ben and Dave have come up here.

“Every single person in the team, Danny the team manager was here last night, Chris Clarke has driven bits back to Albury (team base).

“Everyone has put in to get this car back on track this morning and I am very proud of the job they have one, it is amazing.

“When other guys when they finished work on their car, they all came over and worked on this car, so great effort and hopefully we can reward their dedication by getting a result this weekend.”

The BJR crew will compete against Shell V-Power Racing, which got both of its entries into the finals, and the #23 Nissan Motorsport crew which services Michael Caruso 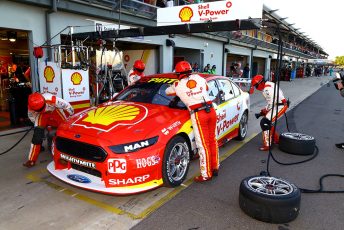 DJR Team Penske managing director Ryan Story says that the double qualification for the finals is reflective of the professionalism of the squad.

“We’re pretty proud to have both our cars represented there and especially so given that the challenge is supported by Pirtek who are a foundation partner of our team,” Story told Speedcafe.com.

“It’s testament to our personnel and the way in which our team manager Ben Croke and crew chief Andrew Atkins have been running that side of the organisation throughout the year.

“It’s all well and good to have fast cars but if you can make up a little bit of time in pit lane it’s free time.

“It’s something where everyone can really play a part and have a role in that, and the guys take a lot of pride in the fact we managed to get both our cars in that position.

“It’s a really good opportunity and it puts a spring in everyone’s step and the boys will be working pretty hard to try and get that Golden Rattle Gun, I can tell you.” 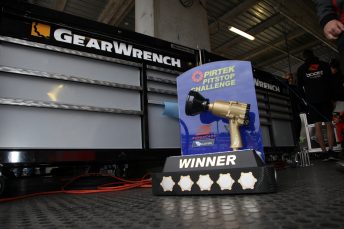 The Pirtek Pit Stop Challenge has been run during the Saturday races at Super Sprint events this season.

Points were awarded to each car, with 26 for the fastest pit stop in the race, 25 for second fastest, and so on down to one point for the slowest car.

Times were measured from pit entry to pit exit.

BJR will face the #17 DJRTP car in one semi-final, while Nissan Motorsport goes up against the #12 DJRTP car, before the winners of the respective semi-finals face off in the final.

Cars will be placed in position by the teams at the start line of the Pirtek Pit Stop Challenge area, with the primary drivers sitting in their cars.

A green flag drop will signal a maximum of four team members per car to push the car to its pit bay, where the car will be jacked up and have four wheels changed.

Once the car has dropped from its jacks, the four team members will push the car across the Pirtek Finish Line, with the winner being the first car to have the front edge of its splitter across the line.

A slow-motion frame-by-frame camera will be used to decide photo finishes.

The winning crew will be awarded a $25,000 cheque and have their name engraved on the all-new perpetual Golden Rattle Gun Trophy.