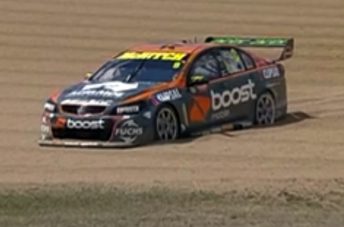 Ash Walsh in the gravel after turning laps in the #8 etry during co-driver practice. Pic: Fox Sports

A crash while testing a sportscar at Phillip Island last week cast doubt over Walsh’s participation in the Great Race, where he is co-driver with Tim Slade at Brad Jones Racing.

The 29-year-old passed an extraction test on Thursday morning before completing a handful of laps in the Nick Percat/Macauley Jones entry after Tim Slade crashed the #14 Freightliner entry they’re sharing this weekend.

“Still painful obviously but I feel like I will be okay,” Walsh said after climbing out of the #8 entry in Practice 2.

“Getting in and out of the car is probably the worst part, I don’t have very good mobility at the moment and obviously it hurts to fold yourself into a pretzel and try and get out.”

A locked brake saw Walsh slide off the circuit at the Chase, becoming bogged in the gravel and drawing a red flag ten minutes into the session.

He was dragged free from the gravel without damage before returning to the pits and climbing from the car.

Should Walsh fail to convince the team that he’s fit enough to compete, Andre Heimgartner is on standby to slot in alongside Slade.