Supercars set for longer races at AGP in 2018

Supercars set for longer races at AGP in 2018 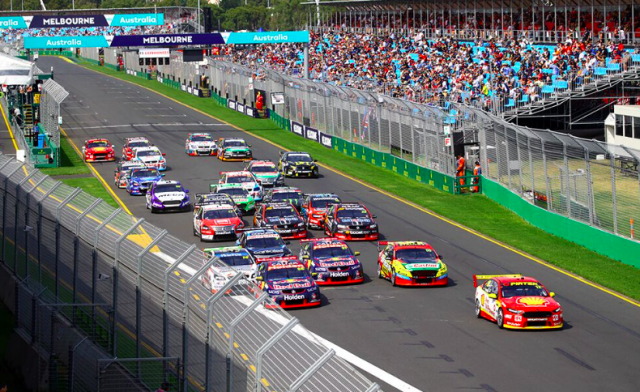 Speedcafe.com has learned that four Supercars races will again be held at Albert Park, with all featuring extended distances in a variation of the SuperSprint format.

It is understood there will be two 120km sprints without pit stops and a pair of feature races including a tyre change of 200km each.

There is also the possibility that one of the non-stop sprints will be just 100km and that the main race could be as long as 250km.

The V8 support races have been elevated to title points-scoring status for the first time following a long campaign by Supercars and the Australian Grand Prix Corporation.

There will be Supercars track action on all four days of the March 22-25 AGP, with extended practice and qualifying sessions on the Thursday preceding races on the Friday, Saturday and Sunday.

It is expected that the shorter sprints will be run on the Friday, with the longer pit stop races split between the Saturday and Sunday, leading into the twilight F1 qualifying and season-opening AGP respectively.

There will also be the added attraction of an expanded Supercars fan zone.

The AGP race formats, which are understood to have been agreed between Supercars and the AGPC late last month, were not announced with yesterday’s release of the full 2018 Virgin Australia Supercars Championship calendar.

What is certain is that all the races will be longer than the quartet of 70km dashes that topped the AGP undercard in recent years, limited to a maximum of 30 minutes each by F1 scheduling rules.

But a more enlightened attitude by new F1 owner Liberty Media, which recognises the attraction of the V8s, has allowed longer races counting towards the Supercars championship previously denied under Bernie Ecclestone’s regime.

According to the AGPC’s general manager of motor sport, entertainment and industry, Craig Fletcher, championship status for the Supercars support races has resulted in a big boost in interest.

“In terms of fan engagement, listening to the fans and the research, this is what they want, along with the drivers and Supercars.

“We’ve collectively worked on this for a while and the planets have aligned with the new administration of F1, and we’re all looking forward to it.

“And everyone I’m talking to, from the drivers to the people at Supercars, it’s been an amazing response already.”

“There’s always been this thing hanging around the Supercars at our event that they’re not real races because there are no points,” he said.

“Well, all that’s gone out the window now.

“All the drivers are really excited about it, as we are. Next year will be the first time ever that the races are part of the Supercars championship and it’s only going to get bigger and bigger.

“And that’s everything from fan engagement to commercial support to hospitality – it’s just a positive everywhere.”

AGPC chief executive Andrew Westacott added that the Supercars support races becoming part of the championship had played a part in increased advanced ticket sales for next year’s AGP.

“We’re already up on this time last year by about 10 percent,” Westacott said.

“So there are good indications that ticket sales are heading in the right direction and Supercars would be a contributor to that.”

The AGP joins Tailem Bend as an addition to the series, expanding the Supercars championship calendar to 16 events.