Rullo looking to bounce back after early crash

Rullo looking to bounce back after early crash 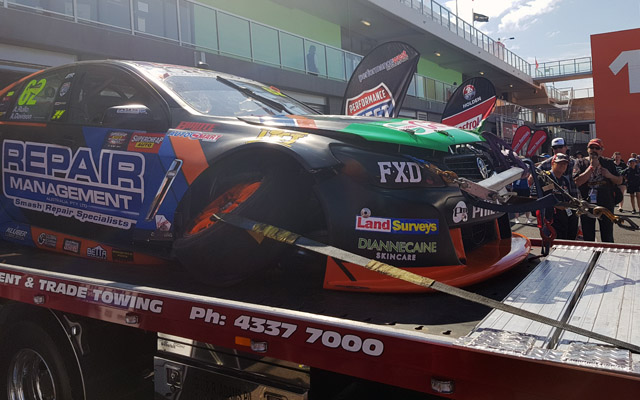 Alex Rullo expects co-driver Alex Davison will be on track in Practice 2 despite suffering an early crash at Mount Panorama in the build-up for Sunday’s Supercheap Auto Bathurst 1000.

Rounding Forrest’s Elbow towards the end of the opening 60-minute session, Rullo tagged the wall at corner exit.

The resulting damage forced Rullo to stop at the top of Conrod Straight, drawing the red flag as his car was retrieved.

Despite the setback, Rullo is confident the team will have the car repaired in time for co-driver Alex Davison to bank some laps in the co-driver session.

“It’ll just be bolt on stuff, no rails or anything, no chassis damage I don’t think,” Rullo told Speedcafe.com.

“Unlucky that we’ve done some damage already on the car but it’s a long weekend ahead. Hopefully we’ll get it back out for Practice 2 for Alex.”

The team had just made a change which, coupled with a green track, combined to catch the rookie out.

“We made just a rear wing change which sort of tends to give it a little bit of push through the low-speed corners, so (I) experienced a bit of that,” he explained.

“It sort of understeered at the start and turned into a bit of oversteer. It just caught me off guard, it was my mistake.”

Rullo ended the session in 26th place, having completed 11-laps prior to his session-ending crash, with a best time of 2m 09.703s.