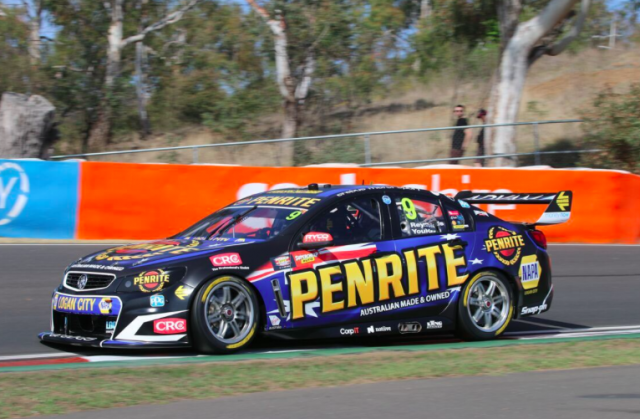 David Reynolds set a blistering pace to head the times while Shane van Gisbergen found the wall in Practice 3 for the Supercheap Auto Bathurst 1000.

The Erebus Motorsport driver saved his best until the final minutes as he produced an impressive 2:05.09s effort to top an eventful 60 minute session at Mount Panorama.

“I gave a little bit away across the top and did a bad job somewhere, but that is what practice is about,” said Reynolds.

“My car has performed really well today, all the team has been fantastic, it is good to be ‘Thursday pole’.”

Reynolds’ time surpassed Supercars championship leader Scott McLaughlin, who had topped the majority of the session.

McLaughlin’s time turned heads in the paddock as the Shell V-Power Racing driver occupied a margin of more than a second over the field for large periods.

While Reynolds and  McLaughlin impressed, race contender van Gisbergen brought out the red flags at the halfway point when he suffered a crash at The Dipper.

The Red Bull Holden driver ran wide at the corner before hitting the concrete wall, which left the Commodore with damage to the left front and rear.

The session was halted again with 12 minutes remaining when Simona de Silvestro’s Nissan ground to halt at the Conrod Straight with an electrical problem.

Once the action resumed, a flurry of fast times arrived.

Red Bull Holden’s Jamie Whincup was among those to improve in the dying minutes as he slotted into fifth, while Brad Jones Racing secured sixth through Nick Percat in the #8 entry.