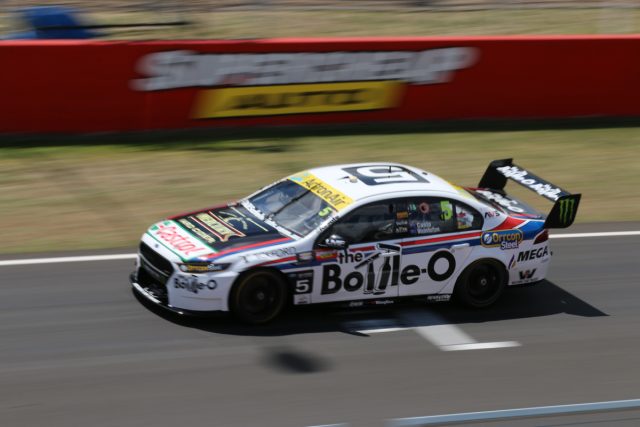 Mark Winterbottom’s co-driver fired in a 2:06.32s effort in the dying seconds of the 60 minute session to topple Prodrive team-mate Steve Owen in the #55 Supercheap Auto Falcon.

Canto’s time proved 0.4s faster than Owen, who had enjoyed two spells at the top of the timesheets.

Shell V-Power Racing’s Tony D’Alberto was third fastest ahead of Luke Youlden in the #9 Erebus Motorsport Holden as times tumbled towards the end of Practice 2.

Following on from opening practice, the session was once again interrupted by two red flag periods.

The first was caused by Ash Walsh who locked the brakes and found himself beached in the gravel at The Chase 10 minutes into the hit out.

Walsh was behind the wheel of the #8 Brad Jones Racing Commodore for a three lap run to assess his fitness, while his team repairs the #14 Freightliner Racing Holden.

The car sustained heavy damage when Tim Slade crashed at The Esses in opening practice which ruled the Holden out of action for the remainder of the day.

Action resumed for a further seven minutes before red flags were shown after Richard Muscat found the wall at The Dipper in the #34 Garry Rogers Motorsport Holden he shares with James Moffat.

The incident limited Muscat to just five laps, clocking the slowest time of the session.

Just 24-cars ventured out as Lucas Dumbrell Motorsport worked on Alex Davison’s car following a crash for Alex Rullo in opening practice which damaged the right front corner of the Commodore.

Alex Premat in the #17 Shell Ford and Paul Dumbrell in #88 Red Bull Holden enjoyed a period at the top of the times before sliding to 16th and 17th respectively.

Matt Campbell was 23rd in the #97 Red Bull Holden he shares with Shane van Gisbergen.

Primary drivers will jump back in the cars for today’s final 60 minute session, which begins at 1445 local time.