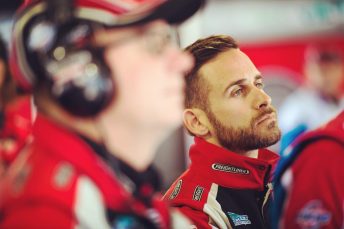 Ash Walsh is set to take part in opening co-driver practice for the Supercheap Auto Bathurst 1000 tomorrow if he successfully completes a driver exit test prior to the session.

The Brad Jones Racing co-driver’s participation in the Great Race was placed in doubt after he suffered injuries following a high speed testing crash at Phillip Island last Thursday.

Walsh, who is set to partner Tim Slade in the #14 BJR Commodore, was airlifted to Royal Melbourne Hospital where he was diagnosed with a contusion on his right lung and severe bruising.

The 29-year-old remained hopeful he would be fit enough to compete when Speedcafe.com contacted him on Monday.

Walsh underwent physiotherapy over the weekend and delayed his flights to Bathurst in order to complete a course of hyperbaric oxygen chamber therapy on Tuesday and Wednesday.

Upon arrival at the circuit this afternoon, he sat in the car to test his comfort levels.

The Queenslander will have to prove he can exit his car in an emergency within seven seconds to prove his fitness before first practice at 0945 local time.

“I had a sit in the car and everything feels like it’s ok,” said Walsh.

“Where I’m sore isn’t too bad in the car. I feel like at the moment I’m going to be fit and ready to go.

“I’m better than I thought it was going to be. I’m just happy to be able to come here, to be honest.

“Tomorrow morning I’ve got an intercostal (nerve) blocker planned, and that’ll help with the rib pain and stuff like that.

“I actually fared better than I thought I would, sitting in there.

“I feel like even without it I should be ok, but you can’t tell until you actually get in there and drive.”

I think I will be fine, fingers crossed.”

Earlier this week, team owner Brad Jones told Speedcafe.com that he was yet to source a replacement driver if Walsh was deemed unfit to race.