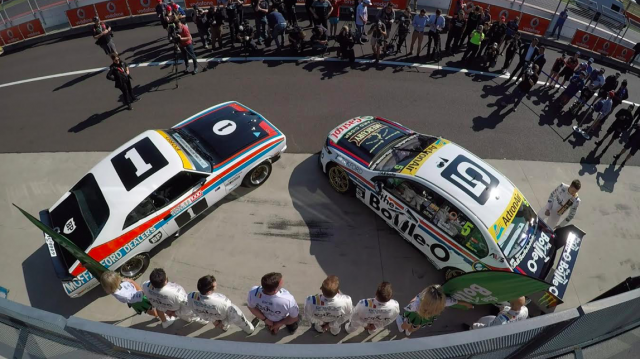 Prodrive will adopt a ‘win it or bust’ attitude for this weekend’s Supercheap Auto Bathurst 1000 with a full fleet of Falcons running the latest upgrade package that proved successful at Sandown.

The Melbourne squad heads to Mount Panorama in fine form after taking out the preceding Sandown 500 courtesy of Cameron Waters and Richie Stanaway, while Chaz Mostert and Steve Owen finished third.

Sandown saw the team roll out much heralded engine and chassis upgrades for Waters and the #5 car of Mark Winterbottom and Dean Canto.

These have now been applied to all four of its cars with Mostert/Owen and Jason Bright/Garry Jacobson now set to receive a boost.

While Prodrive boss Tim Edwards has downplayed the updates to the cars, he says the team will attack this weekend’s Great Race with an aggressive approach.

“We have got four competitive cars and we have been developing hard and we come into this weekend very aggressive with our approach, but it is win it or bust, so you throw everything at it,” Edwards told Speedcafe.com.

“I think we have been in the hunt all year and we haven’t quite always stood on the top step but we have been there or thereabouts.

“As combinations they are all strong and with Cam finding his form it bodes well for a good weekend.

“It is not all about the engine we have been upgrading the whole car. There is a whole host of things that are different on the car and we have been working on the engine.

“It is a different track to Sandown so you can’t necessarily read into your speed at that circuit as it is very different here.

“We have been finding some good things with the cars over the last three or four rounds, so if you mash all those together there is going to be elements for Bathurst everywhere.

“We know what we are looking for in the car at this circuit and we think we have come here with a very competitive package.”

However, he admits his squad will be among several cars capable of winning Sunday’s 1000km showpiece.

“The reality is there is so many people that could win the race this weekend,” Edwards added.

“Five years ago we may have qualified closely but in terms of race pace there was clearly faster cars. These days there are so many fast cars.

“All we can do is focus on ourselves. We think we have come here with a very competitive car and we are going for the win.”

Edwards’ ‘win it or bust’ attitude is shared by Winterbottom, who heads to Bathurst out of the title picture lying sixth in the standings.

“It’s been a lean year and not where we expected to be, so a good result here would definitely help,” said Winterbottom.

“We have nothing to lose. It’s a nice feeling not to have that pressure and just have a crack, but at the same time you’d rather be in a good position in the championship.

“But we won’t hold back. We’ll be aggressive and do what we need to do to win it.

“We have got good bits in the car and we will see Thursday morning if it is quick enough.

“We are confident we have got the package to win if we do it right, but time will tell.”

Prodrive’s last Bathurst triumph arrived in 2014 when Mostert and Paul Morris came from last to first.