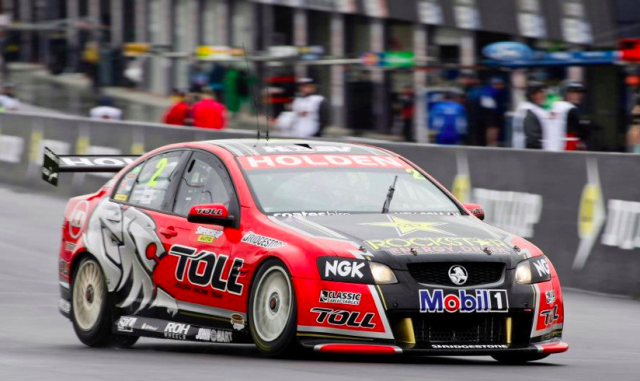 Every one of the McLaren F1 boss’s collection has scored at least one significant race victory and the HRT Commodore rates especially highly because it won the 2011 Bathurst 1000 in the hands of Garth Tander and then rookie Nick Percat.

“With every car in my collection, the No.1 criterion is the car had to win at least one race in period or I won’t buy it, I don’t care what it is,” Brown told Speedcafe.com.

“This one won Bathurst, an iconic race, and I knew it’d be a blast to drive.

“Also, I have a lot of formula cars and I need to get some bigger cars for my fat arse. So it was all those collective reasons that I went ‘This is a cool car for the collection’.”

Brown, 45, is scheduled to get behind the wheel of HRT/Walkinshaw Racing’s last Bathurst winner at Donington Park in the English Midlands on October 10.

“I think it’s going to be awesome,” he said.

As revealed exclusively by Speedcafe.com last month, Brown is a leading contender to buy a minority stake in Walkinshaw Racing via his United Autosport sportscar team, which he co-owns with fellow former racer Richard Dean.

The wealthy UK-based American entrepreneur is executive director of the McLaren Technology Group, overseeing the struggling F1 team. He is also the non-executive chairman of the Motorsport Network and a director of Cosworth.

The ex-HRT Commodore’s provenance was a major attraction to Brown, who is a Supercars fan and rates the Bathurst 1000 as one of the world’s great races.

“I think the Bathurst race is totally iconic and maybe while it doesn’t have the same stature as Indy and Le Mans on a really broad basis, I think within the racing community, Bathurst is like the Le Mans 24 Hours and the Indianapolis 500,” he said.

“The Commodore was a works car with a really good team, and it won with a rookie winner and Tander, who is mega.

“When I collect, I like big high horsepower stuff, works cars.”

The HRT VE Commodore was driven to a thrilling victory by Tander and Percat in the 2011 Supercheap Auto Bathurst 1000, scoring the then closest competitive finish in the event’s history.

It was shaken down by James Courtney at Winton Motor Raceway before being shipped to the UK, where it arrived early last month.

Brown began negotiations to buy the Commodore racer early this year following a recommendation from British motor sport supremo Alan Gow, an expatriate Australian who is Courtney’s manager, and clinched the deal during his visit to Melbourne for the Australian Grand Prix.

It is the latest of the Bathurst- and ATCC/Supercars title-winning HRT cars sold by the Walkinshaw family, including the famous 1990 Sierra Cosworth RS500-conquering VP Commodore of Allan Grice and Win Percy.

Brown’s busy schedule means he doesn’t get to drive or race many of his classic collection.

“I have too many and not enough days, so it takes about three years to cycle through,” he said.

“Unfortunately, with collection growing, it’s getting more difficult. But a lot of them are F1 cars, which I don’t like to take out that much because you’re just terrified they’ll explode.

“They’re not easy to repair, so things like my Mika Hakkinen MP4/16, that gets 15 laps every two years just to make sure it’s all working. You don’t want to pound around in those things.”