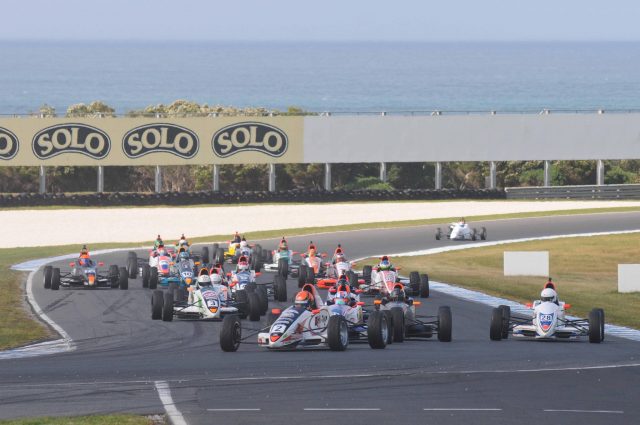 Max Vidau has wrapped up the 2017 Australian Formula Ford Series in a nervous finale at Phillip Island.

An incident in Race 2 left Vidau without points for that encounter and opened the door for form man Cameron Shields to snatch what had seemed an unlikely title.

Vidau had made the best possible start to the weekend by qualifying on pole, earning an extra series point, and banked a solid third place finish in Race 1 behind Shields and Jayden Ojeda.

He could manage only 19th in Race 2 in a wounded Sonic Motor Racing Mygale and gave up 20 points to Shields, who took his second race win of the weekend.

Vidau needed a single point from Race 3 to ensure that the series was his, and he did more than enough by driving from near the rear of the grid to finish third.

The South Australian also earns the right to participate in the Mazda Road to Indy $200K Scholarship Shootout in the United States at the end of the year.

“Coming into the weekend, I was fairly relaxed but I was starting to feel the pressure before the last race,” said Vidau.

“There was a fair bit of damage to my car after Race 2, and it’s a real credit to the Sonic crew that they were able to put it back together in time for the last race.

“It’s been an amazing season with plenty of highlights and happy memories, and I’m looking forward to the experience of participating in the Mazda Road to Indy Shootout.”

Shields swept the weekend in his BF Racing Mygale to take a third straight round win, and eight of the last nine race wins.

Ojeda (Borland Racing Development Spectrum) moved up to third in the series having placed the same for the round after race results of second, ninth, and fourth.

Hunter McElrea was bumped back to fourth in the points in a trying weekend.

McElrea’s Sonic Motor Racing Mygale broke a driveshaft in qualifying before he was penalised for contact with Nathan Herne while driving through the field in Race 1.

He fell afoul of officialdom again in Race 2 having overtaking under yellow flag conditions, before driving from 15th to second position in Race 3.

Harrison Jones bagged a maiden round podium with race results of fourth, fourth, and seventh.