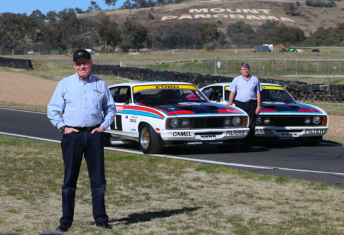 Prodrive is set to reveal a special livery to mark the 40th anniversary of the famous Allan Moffat and Colin Bond Bathurst 1000 one-two finish at Mount Panorama.

Mark Winterbottom and Dean Canto’s #5 Falcon FGX will carry a colour scheme, to be unveiled on Wednesday, which is expected to pay tribute to the iconic moment in Bathurst history.

The 1977 triumph was Moffat’s fourth and final outright victory in The Great Race.

It is not the first time Prodrive has marked the famous Ford Bathurst one-two after running a retro livery on Falcons for Winterbottom and then team-mate Will Davison to mark The Great Race’s 50 year celebration in 2012.

Prodrive is not the only team paying tribute to Moffat this weekend with Garry Rogers Motorsport running a special 1987 Rothmans Holden Commodore livery on the #34 entry, driven by son James Moffat.

Meanwhile, Winterbottom heads into this year’s race fully focussed on repeating his 2013 victory at Mount Panorama.

“We’ve got nothing to lose at the moment,” said Winterbottom in a team preview.

“We’re sixth in the points, we’ve had pretty good car speed the last couple of rounds, so the form leading in has been quite good, but we’ve got no pressure.

“So we’ll go out there, have a crack at it, put all our eggs in one basket and try and win the race. If you win Bathurst, it doesn’t really matter what happened during the year.

“That’s the big race for us. If we can win it, it’d be fantastic. That’s the goal, we’re going out to win. We’re not holding back, we’re putting it all out to try and win it.”

The car will hit the track for the first time when opening practice begins on Thursday at 0945 local time.