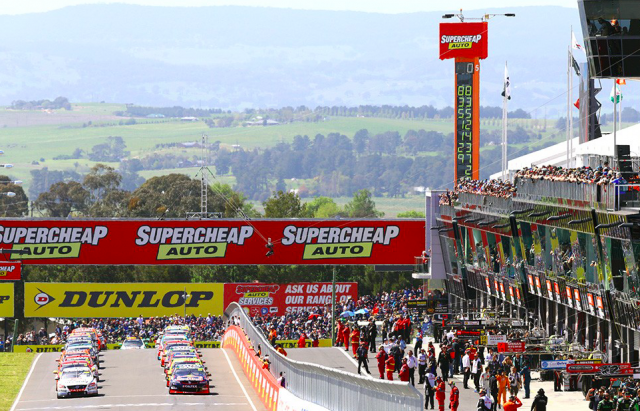 This week’s Pirtek Poll wants to know who you think will win the 2017 Supercheap Auto Bathurst 1000.

Mount Panorama is primed to host the latest instalment of The Great Race with a grid of 26 cars and 52 drivers all desperate to claim Australian motorsport’s most coveted prize.

Tipping the outcome of the 161 lap endurance race has proved a difficult task as the 6.2km track usually offers up plenty of drama and incident.

However, heavyweight operations Triple Eight, Shell V-Power Racing and Prodrive appear to be among the favourites for this year’s edition.

Championship leader Scott McLaughlin and his co-driver Alex Premat are listed by the bookies as joint favourite alongside the Red Bull Holden pairing of Jamie Whincup and Paul Dumbrell.

McLaughlin looks set to receive his best opportunity yet to conquer the race having finished no higher than fifth in his previous five attempts.

Armed with a strong Shell Ford and Frenchman Premat, who finished second alongside Shane van Gisbergen last year, the duo will be tough to beat.

Equally as formidable is the pairing of Whincup and Dumbrell, who have proved to be the fastest at Bathurst in recent years.

Only a mixture of penalties and poor decision making has undone their previous attempts. The pair last won the race in 2012.

Van Gisbergen came close to winning the race last year and will again be a contender alongside Porsche Supercup star Matt Campbell.

The reigning Supercars champion will certainly pose a threat as he looks to add a maiden Bathurst 1000 crown to his glittering CV.

Likewise the #888 entry of Craig Lowndes and Steven Richards cannot be ruled out with 10 Bathurst 1000 wins between the pair.

The 2015 winners will be keen to bounce back from a challenging Sandown 500. Lowndes has been on the podium in 10 of his last 14 visits.

The #12 Shell Ford of Fabian Coulthard and Tony D’Alberto offers a partnership more than capable of taking out the race.

Coulthard has four race wins to his name this season but is yet to stand on the podium at Bathurst.

Not to be overshadowed, Prodrive head to Bathurst in strong form having finished first and third at the recent Wilson Security Sandown 500.

Dark horses for the race include Garry Rogers Motorsport and Brad Jones Racing, while the likes of Nissan Motorsport, Mobil 1 HSV Racing and last year’s winner Tekno Autosports could also throw up a surprise result.