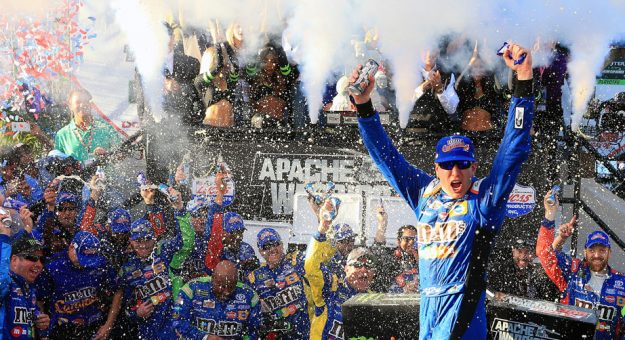 Kyle Busch left it until the second last lap to pass Chase Elliott and win at the Monster Mile, as the first round of NASCAR’s Playoffs came to a close.

The attention was on the front and mid-pack as the title chances for Austin Dillon, Kasey Kahne, Kurt Busch and Ryan Newman all ended at Dover.

Busch led 30 laps in total to score his 42nd career win and third at the Monster Mile. He also won last week at Loudon.

“That was hard-fought, that was everything I had,” said Busch.

“I wasn’t sure I was going to make it, I rim-rided and carried it by the 24. I saw that carrot and I went for it.”

It was a disappointment for Elliott who led a race-high 138 laps, and is still to break through his first race win in the Monster Energy NASCAR Cup.

Twelve cars remained on the lead lap at the end of the Apache Warrior 400. Thirteenth-place finisher Ryan Newman missed advancing to the playoffs by two points.

The stage wins went the way of Brad Keselowski and Kyle Larson.

The race was relatively clean with the only major issue being a broken axle for Denny Hamlin late in the race.

Next week the series heads to Charlotte Motor Speedway to start the second round of the Playoffs.