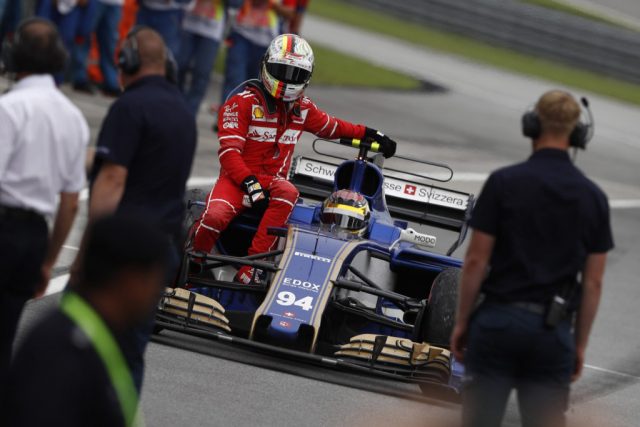 Stewards have ruled there is no further action required following a bizarre incident after the chequered flag at the Malaysian Formula 1 Grand Prix between Sebastian Vettel and Lance Stroll.

As the pair rounded Turn 5, Stroll appeared to straighten his Williams, making contact with the left rear wheel of Vettel’s Ferrari.

The impact plucked the wheel off the Ferrari, leaving Vettel stranded on track before the German hitched a ride back to the pits on Pascal Wehrlein’s Sauber.

“I went on the outside to pick up a bit of rubber – I think Lance wasn’t looking and wanted to do the same, but that was too late, I was there already and we had contact,” said Vettel.

“That’s completely unnecessary. I think he just didn’t look and then decided to pick up some rubber.

“It’s not my fault if somebody decides to pick up rubber and hit my car.”

Stroll, who finished eighth for Williams, believed that it was unintentional from both drivers.

“It was the in-lap, I was just driving very slowly back into the pitlane,” said Stroll.

“Just a very strange incident. The race wasn’t going on so it wasn’t intentional from either of us.”

Having started last, Vettel ended the race fourth after a strong drive through the pack.

In the closing stages he mounted a challenge on Daniel Ricciardo for third, but was ultimately forced to settle for fourth.

“We have a very quick car, and if we start ahead, we win the race,” reasoned Vettel.

“That didn’t happen today – we were the quickest car for the majority of the race, but we had to start last.

“It was more entertaining, the first couple of laps in particular.”

With Lewis Hamilton second, the result sees Vettel concede another six points in the championship standings to now trail the Mercedes driver by 34 points with five races remaining.