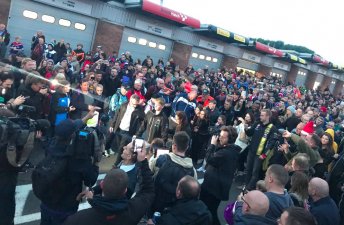 Teenage racing driver Billy Monger who lost both his lower legs in a horror crash has walked part of the Brands Hatch circuit to raise money for charity.

The 18-year-old triggered an outpouring of support from the motorsport fraternity when a Formula 4 crash at Donington Park in April left the Brit with life changing injuries.

Monger had both his lower legs amputated and spent more than a month in hospital.

Since the accident he has managed to jump behind the wheel of an adapted race car and learn to walk again with the use of prosthetic limbs.

Monger was joined by more than a 1000 people at the British Touring Car Championship finale on Saturday as he walked 200 metres of the circuit, before going on to compete the lap in a golf buggy.

The inspirational teenager, who aims to return to racing next year, was raising money for the air ambulance.