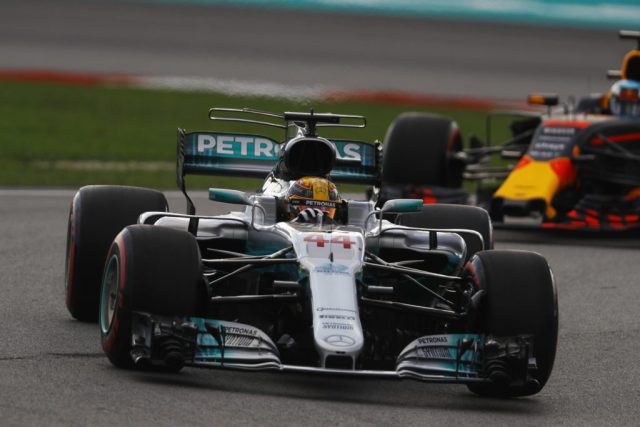 Hamilton narrowly beat Kimi Raikkonen to top spot, the Mercedes driver bouncing back from a torrid Saturday to claim his 70th Formula 1 pole.

His championship rival meanwhile will start from last after problems saw Vettel fail to set a time in the session.

The German had a last-minute engine change before the session only for further problems to see him limp back to the pit lane just moments after the session began.

For a time it looked as though the team was ready to send him back out on track in the dying moments of Qualifying 1, only for Vettel to climb from the car.

Max Verstappen was the leading Red Bull in third ahead of Daniel Ricciardo in fourth, with Valtteri Bottas rounding out the third row.

Bottas had been quickest in Qualifying 2, heading the session over Raikkonen while Hamilton could do no better than fourth.

It was then Esteban Ocon who was the fastest Force India driver in sixth over Stoffel Vandoorne, Nico Hulkenberg, Sergio Perez and Ferndando Alonso.

Just outside the top 10 were both Williams, with Felipe Massa and Lance Stroll.

Toro Rosso will also start with both cars down the grid, with Pierre Gasly 15th on debut one place back from Carlos Sainz.

Jolyon Palmer split the Williams, and will start from 12th for tomorrow’s race for Renault.

Further back, Vettel will start from last place on tomorrow’s grid, behind Marcus Ericsson, Pascal Wehrlein, Kevin Magnussen and Romain Grosjean, who also failed to make the first cut.