Formula 4 race ends with no finishers

Formula 4 race ends with no finishers 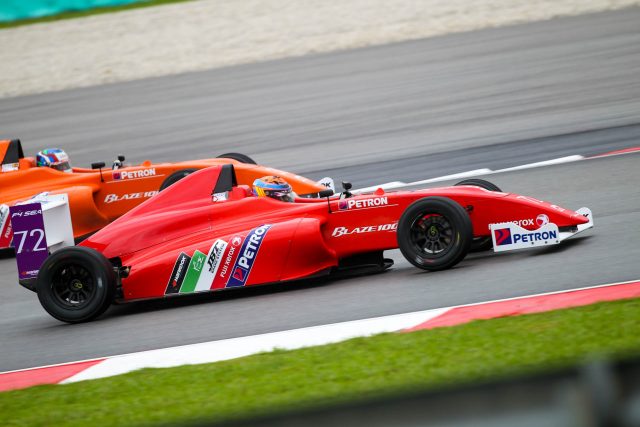 A Formula 4 South East Asia race has finished at Sepang with no cars left running at the full scheduled distance.

Just nine cars took the start of the eight-lap race, before one by one running out of fuel in the closing stages.

Four cars found themselves rolling to a halt on the front straight, and with others at turn two and in the middle part of the lap, officials elected to deploy the safety car.

The safety car emerged at the start of what would have been the final lap, but never collected the field as the race leader ground to a halt shortly after the penultimate corner at the end of lap 7.

That promoted Kane Shepherd, the only remaining runner, to the race lead, though he lasted only two further corners before also running dry.

It left for an unusual circumstance where there were no runners remaining at the end of the race, forcing officials to roll the race results back to the end of Lap 7.

As Shepherd was the only driver to complete the lap he was awarded victory, with every other car in the field classified as ‘DNF’.

The situation was caused by a fast turnaround between races, with Formula 4 have three 25-minute races in quick succession on Saturday morning.

“With Races 2 and 3 back-to-back and without the possibility to top up, we filled the cars for both races before the start of Race 2.

“However we miscalculated the requirements. As we are a one-team championship all the drivers were unfortunately affected.”

The opening Formula 4 race of the weekend was cancelled on Friday evening after a metal grate was damaged during Formula 1 practice.