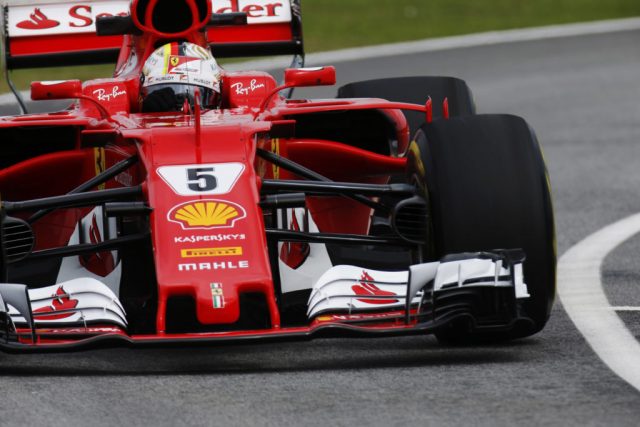 Opening practice was initially ‘indefinitely’ delayed as heavy rain battered the circuit, before a crash from Romain Grosjean drew the red flag towards the end of Practice 2. 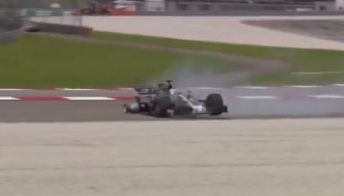 Grosjean’s crash was caused by a piece of the drain cover at the penultimate corner, which had been lifted by Kimi Raikkonen and Valtteri Bottas just moments earlier.

The Haas driver ran over the exposed grate, pulling the right rear tyre from the rim pitching him into the barriers.

To that point, Vettel had set the fastest time with a 1:31.261s lap, more than half a second faster than Raikkonen.

The two Red Bull’s were next best, Daniel Ricciardo narrowly faster than Max Verstappen who had topped the morning’s rain-shortened session.

Mercedes endured a torrid start to the weekend, with excursions for both Bottas and Lewis Hamilton interrupting their sessions.

Bottas ran wide at Turn 10, damaging the floor on his Mercedes as he bounced through the gravel, while Hamilton had a half spin at Turn 8 which saw him ruin a set of tyres.

With opening practice all but washed out, the team is now heavily compromised heading into final practice tomorrow as it looks to fine-tune its setup for qualifying and Sunday’s race.

The damage to the circuit caused by the Grosjean incident saw the red flag shown with 15-minutes remaining and not restarted as repairs were affected.

It left Vettel on top from Raikkonen with Alonso fifth best, the McLaren driver having been third fastest in opening practice.

Hamilton could do no better than sixth, one place ahead of his team-mate while the top ten was completed by Sergio Perez, Nico Hulkenberg and Esteban Ocon.