Ricciardo needs ‘half a second’ to catch Ferrari

Ricciardo needs ‘half a second’ to catch Ferrari 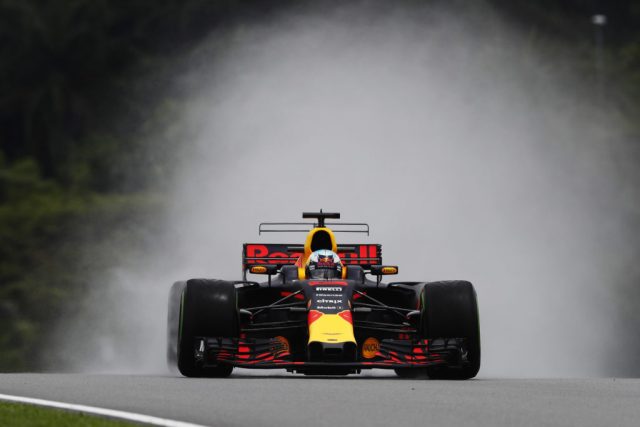 Daniel Ricciardo is searching for half a second a lap in order to be on terms with Ferrari heading into Sunday’s Malaysian Formula 1 Grand Prix.

Red Bull topped Practice 1 in damp conditions courtesy of Max Verstappen, but fell behind the Ferraris of Sebastian Vettel and Kimi Raikkonen in the second 90-minute session. according to Ricciardo there’s more work to do heading into qualifying tomorrow.

Happy with the early pace, Ricciardo believes there’s more work to do heading into qualifying tomorrow if he is to be a contender in Sunday’s race.

“Out of the box we were quite quick and I think we can hold that pace if that’s the conditions,” Ricciardo said.

“On the intermediates we were happy, we had a pretty good balance and in the dry we need to find a bit more pace.

“I don’t think it’s big changes, just a few little things and I think we’ll find half a second quite quickly, and will put us more in the fight in the right conditions.”

But while he is focused on catching the pace-setting Ferraris, the Australian is wary of a renewed challenge from Mercedes, which had a tough opening day.

A spin for Lewis Hamilton and an off-track excursion for Valtteri Bottas cost both drivers track time, the duo ending the day’s running just sixth and seventh.

“I’m sure Mercedes will find the speed, so we need to improve and find half a second somewhere,” Ricciardo warned.

“I think they were quite heavy today – I don’t know if it’s legit or they’re playing some games.

“But to be honest we’re not on the pace.

“Yeah, we were in front of Mercedes today, but really we need to look at Ferrari and try and close the gap.

“On low and high fuel, they were quite a bit faster. We’ve still got a bit of work to do.”