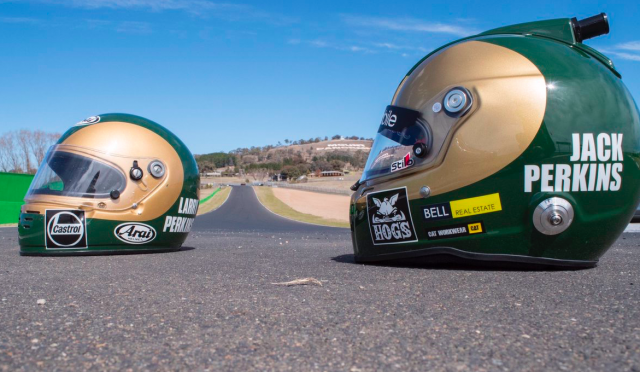 Jack Perkins will pay tribute to his six-time Bathurst 1000 winning father Larry by wearing a special replica helmet at next week’s edition of The Great Race.

The Mobil 1 HSV Racing co-driver will sport a version of the iconic green and gold helmet Larry Perkins wore for his last Bathurst 1000 win in 1997 alongside Russell Ingall.

“Really cool to run a replica of Dad’s 1997 Bathurst Winning helmet at Bathurst next weekend. 20th Anniversary of what was his last win,” posted Jack Perkins on Twitter.

Larry Perkins enjoyed a formidable record at the mountain claiming six victories with his first arriving 1982 when he partnered Peter Brock in a Holden Dealer Team VH Commodore.

He went on to claim three consecutive wins with triumphs in 1983 and 1984.

Perkins returned to prominence in 1990s winning the race in 1993.

He then came from last to first to take the victory in 1995, before winning the 1997 edition, driving for his own Castrol Perkins Racing team.