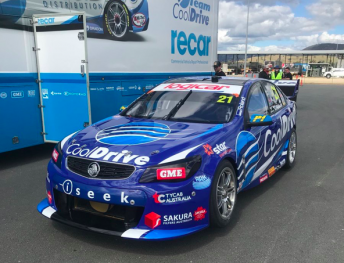 Todd Hazelwood has declared himself ready for his Supercheap Auto Bathurst 1000 debut after completing the shakedown of a newly built Brad Jones Racing Commodore.

The Albury team shook down a new car for Tim Blanchard and co-driver Hazelwood, with the duo sharing the permitted 60km run at Wodonga TAFE’s driver training facility today.

Brad Jones Racing has been forced to speedily construct a new rig for the pair after the previous chassis was destroyed in a spectacular crash involving Hazelwood at the Sandown 500.

The build was only completed midway through this week just in time for a shakedown, before leaving the workshop to make the trip to Bathurst on Monday.

Hazelwood has heaped praise on the squad for their efforts since the crash, and is now focussed on realising a boyhood dream when he lines up in The Great Race for the first time.

“It has been an incredible effort from the team. The mateship and work involved to turn a car around like they have has been truly incredible,” Hazelwood told Speedcafe.com.

“It is a massive credit to the team. The car was in pristine condition like it had rolled out the showroom floor, it had new car smell and everything.

“The car ran faultlessly all day which is a good sign after the work that was put into it over the week.

“We are really looking forward to next week.

“Even though we crashed at Sandown I was able to take away a few things, so we tried a few things today and we made some good progress, hopefully it all works well next weekend.

“The Bathurst 1000 is every kid’s dream growing up here in Australia. I will be like a kid in a candy store when I rock up at the mountain next week.”

Hazelwood is keen to deliver a strong result next week to repay the team.

The 22-year-old says the Sandown crash has not affected his mental preparations for the race.

“It would be amazing if we could get a good result next weekend. We have just got to do the process and see how it ends up,” he added.

“I’m pretty pleased to be doing it with the team I am with as they have made me feel at home and part of the family and that certainly helps.

“You can’t afford to let an incident or a crash hinder what you do, because if you try harder then you could be involved in something worse. I have just got to believe in what I can do.”

The success of the car #21 rebuild has however been tinged with the news that Ash Walsh, co-driver of the team’s sister #14 entry, could miss the race after sustaining injuries in a testing crash at Phillip Island.