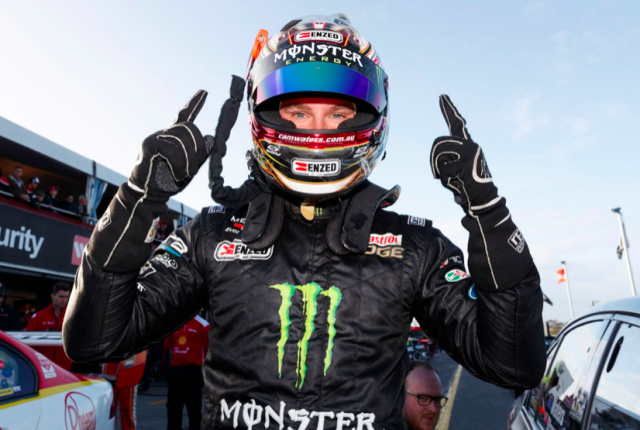 Cameron Waters says that he and Richie Stanaway have proved that they are a genuine threat to win the Supercheap Auto Bathurst 1000 after their triumph at Sandown.

The pair both became Supercars Championship race winners by taking out the Sandown 500, upsetting the form guide after Triple Eight and DJR Team Penske had dominated the season so far.

The #6 Prodrive Racing Australia FGX Falcon effectively led the race for all but 14 laps, during which time Paul Dumbrell had taken over top spot before succumbing to a tyre failure.

The win came after Waters and Stanaway had combined to take the Armor All Pole Position the day before, the former’s second in the top tier of Supercars and the latter’s first.

Waters has told Speedcafe.com’s Up Front With Foges that the performance shows that the Monster Energy-backed entry is a substantial threat to take out the Great Race.

“I guess you take a lot out of the weekend and what our car was doing right. We were quick down the straights and quick through the high-speed stuff and that’s what Bathurst is all about.

“I think we’ve got a good shot at Bathurst. Obviously, you need a quick car, you can’t make mistakes, and there’s a bit of luck involved at Bathurst as well.

“I wouldn’t say we’re the top favourites, I think the heavyweights are still up there, but I think we’ve proved to a lot of people that we can do it on our day.

“If we put it all together, we are there. I prefer to be the dark horse, coming from behind a little bit, but I think we can win it.”

The 23-year-old will embark on his sixth Bathurst 1000 campaign next month hoping to improve on a best result of fourth with Jack Le Brocq last year.

CLICK HERE for more from Cameron Waters in the latest Up Front With Foges.