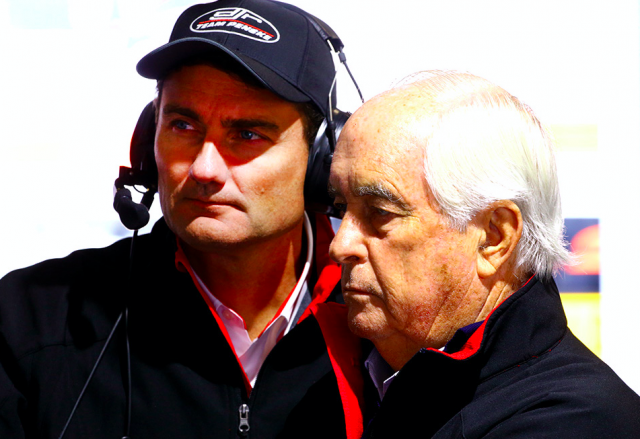 DJR Team Penske patriarch Roger Penske won’t be on hand next week if the Supercheap Auto Bathurst 1000 is added to his empire’s long list of famous race victories.

Speedcafe.com has learned that Penske has had to cancel his planned visit to Mount Panorama because of a clashing commitment in the USA.

It is now expected that the 80-year-old billionaire businessman/team owner will attend the season-ending Coates Hire Newcastle 500 instead.

An informed source confirmed Penske would not be coming to Bathurst as he has “a conflicting commitment”.

It is understood he will attend the Petit Le Mans sports car race at Road Atlanta on the same weekend as the October 5-8 Supercheap Auto Bathurst 1000.

Team Penske is due to field an Oreca 07 LMP2 prototype racer as a prelude to a two-car factory backed Acura assault on next year’s IMSA SportsCar Championship.

The importance of the Acura IMSA program is underlined by Penske’s decision to be present at the team’s preliminary effort in the 10-hour Petit Le Mans sports car enduro rather than the strong possibility of celebrating a Bathurst 1000 victory.

Penske had originally intended to fly from his corporate headquarters outside Detroit to Bathurst in his private jet, accompanied by some of his key senior executives, in the hope of being there if Shell V-Power Racing were to win the Bathurst 1000.

The team is among the favourites following Scott McLaughlin’s pace-setting form in his Shell V-Power Racing Team Falcon, along with Fabian Coulthard’s strong performances, so far this season.

A Bathurst 1000 victory would join Team Penske’s success over 50 years in other great races such as the Indianapolis 500 – 16 times – and the Daytona 500 – twice – plus classics like the Sebring 12 Hours and Daytona 24 Hours.

But it is believed that Team Penske president Tim Cindric, who ultimately oversees DJRTP, will also miss Bathurst to be at the Petit Le Mans trial run for next year’s Acura program.

It is possible Cindric will make a whirlwind visit to DJRTP at the end of this week before going back to the States within a few days.

It is believed that DJR Team Penske has been aware for some time that its majority owner would not be attending the Bathurst 1000.

However, Penske does plan to be at the November 24-26 Newcastle 500, hoping to witness DJRTP winning the Supercars drivers’ and teams’ titles, and then perhaps staying for the Supercars Gala Awards in Sydney.