BJR gearing up for #21 chassis shakedown

BJR gearing up for #21 chassis shakedown 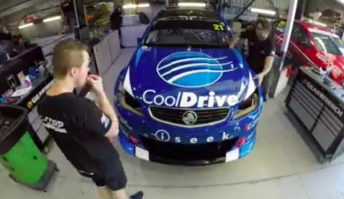 Brad Jones Racing is planning a shakedown for its newly built #21 chassis on Friday afternoon ahead of next weekend’s Supercheap Auto Bathurst 1000.

The Albury squad has been busily preparing a new car for Tim Blanchard and Todd Hazelwood to replace the destroyed chassis caused by a frightening shunt involving the latter at the Sandown 500.

Following extensive work from the crew since the crash, the team is expected to undergo a shakedown at Wodonga TAFE’s driver training facility.

This has arrived amid repairs to its main game cars following that round and a rebuild of Nick Percat’s chassis after a high-speed crash at Albert Park.

Team owner Brad Jones has hailed the continued hard work and effort shown from his team in difficult circumstances this year.

“The guys here at BJR have worked over the weekend on it and it has been coming along quite nicely,” Jones told Speedcafe.com.

“I think it is a fantastic effort from the guys. We have had more than our fair share of damage this year.

“For the guys and girls here at BJR to keep on going to get the job done is fantastic.

“It creates a lot of work but we will get to Bathurst with a new car.”

Brad Jones Racing is set to begin its journey to Bathurst on Monday.