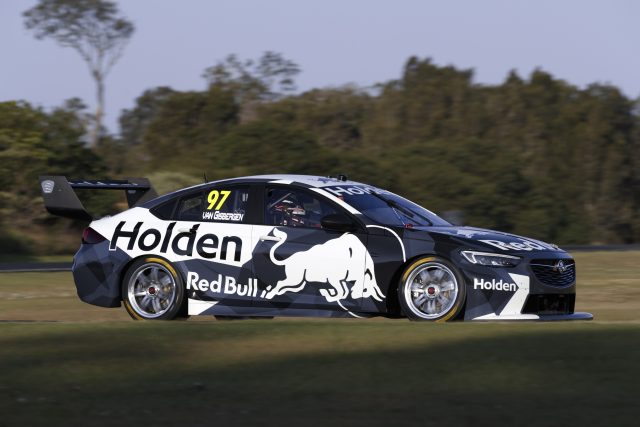 Triple Eight has elected to postpone its first Accredited Manufacturer Test day of the ZB Commodore at Queensland Raceway this week.

The Brisbane squad has cancelled the Thursday test after its first ZB Commodore sustained stone chips to its panels following straight-line aero test runs at Stanthorpe Airport on Sunday and Monday.

It is now expected that the team will reschedule its test the week after the Vodafone Gold Coast 600 in October.

The new ZB Commodore broke cover for the first time last week when the car completed its maiden 60km shakedown at Norwell Motorplex on the Gold Coast.

Triple Eight team manager Mark Dutton says the car needs to be in pristine condition to ensure the aero data is precise ahead of December’s official homologation testing.

“There was a little bit of gravel being flicked up at the straight-line test and when you have only got the bare minimum of panels, when you damage them you can’t run it,” Dutton told Speedcafe.com.

“There is no point running with panels that doesn’t fully represent the car in its true form.

“We still think we got lots of good data but we would rather do the Accredited Manufacturer Test day with the car in perfect condition, so we know that we are learning accurate things.

“When something is brand new you don’t want to assume that (a stone chip) won’t make that much difference.

“We are trying to learn a new thing and if you are not in pristine condition then there are always question marks.”

Head designer of the ZB Commodore David Cauchi has however been impressed by the data recorded so far from the car’s initial runs.

The straight-line runs were carried out by Triple Eight mechanic and Dunlop Super2 Series driver Kurt Kostecki, who has been involved in the build.

“The car is in a very good window of where we thought it would be, which is positive,” Cauchi told the team’s official website.

“The changes we were making were matching the downforce numbers that we were predicting, so we feel like we have a good base car and a good bunch of tools to be able to tune the aero balance come the official Supercars aero test.

“There are a lot of people who’ve worked very hard behind the scenes, as well as going racing, so it was extremely rewarding to see the car on track.

“It’s come together really nicely, it’s very satisfying, but the job’s not done yet – what really matters is how the car performs on track, which we’ll see in the coming months.”

As previously reported, Holden Supercars teams are well underway with preparations for the new ZB Commodore, which will make its competitive debut next year.