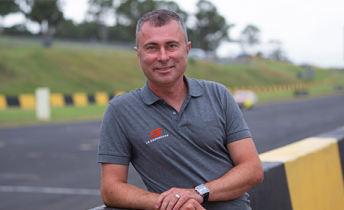 Greg Rust has announced plans to leave his role as part of the Supercars television broadcast team at the end of the season.

The experienced broadcaster has been a prominent feature of Supercars television coverage having served two separate stints.

Rust began as a pit reporter for Network 10’s broadcast team from 1998-2006 before returning to the championship via Fox Sports in 2015.

The Sydney-based broadcaster, who also acts as a lead commentator for the Dunlop Super2 Series, will see out the rest of the current season, with his final round being the Coates Hire Newcastle 500 from November 24-26.

“After long chats with Supercars Management over the past few months we’ve agreed to a change for next year,” said Rust via the championship’s official website.

“I’m looking forward to putting more ‘Frequent Family points in the bank’ as Steve Richards would say and the chance to explore new opportunities.”

Rust is expected to continue in automotive broadcasting after leaving Supercars.