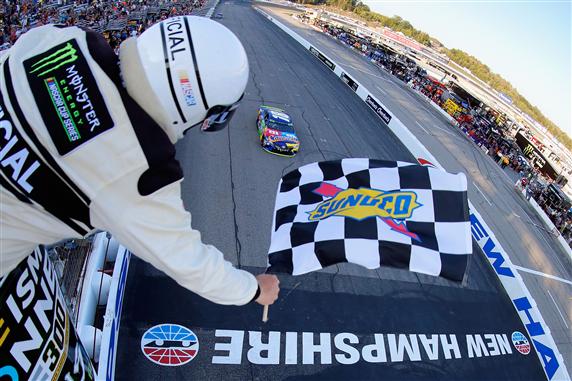 Kyle Busch has guaranteed himself a place in the second round of NASCAR’s Playoffs with a resounding victory at New Hampshire Speedway.

Busch converted his pole position with 187 laps led on his way to his third win of the year; to join Martin Truex Jr. as guaranteed drivers into the next phase of the playoffs.

Busch’s win may have looked easy in the results column, but the early stages were the domain of Truex Jr. who took the Stage 1 win; the 19th stage victory of the season.

Then a wreck on the final lap of the second Stage ended the day for Kevin Harvick and Kurt Busch, but Kyle Busch had to all but stop to avoid the crash.

Truex spun trying to avoid the wreck, but the stage eventually went the way of Kyle Busch.

From that point Busch was able to control things from the lead. Even when cautions flew, his pit crew and great re-starts allowed him to pull away each time.

After the race Busch spoke about missing the crash and scoring the all-important win.

“That was pretty intense,” said Busch.

“It was just a wall of smoke over there off of Turn 2. I listened to the spotter and was basically told to stop and I’m like, ‘Sounds like a good idea.’

“I checked up as much as I could and I was trying not to get run into from behind. All in all, it was a great day. This thing was awesome. We ran up front all day long, we executed, we did a good job, we did what we were supposed to do.”

As much as it was about the leaders, the attention was also focused on those fighting to stay in the championship hunt. The two big hits were Kurt Busch and Kasey Kahne, who had the rear suspension on his car break late in the race.

Next week the series heads to the Monster Mile at Dover where the bottom four in the Playoff hunt will be eliminated after that race leaving 12 into the next series of races.