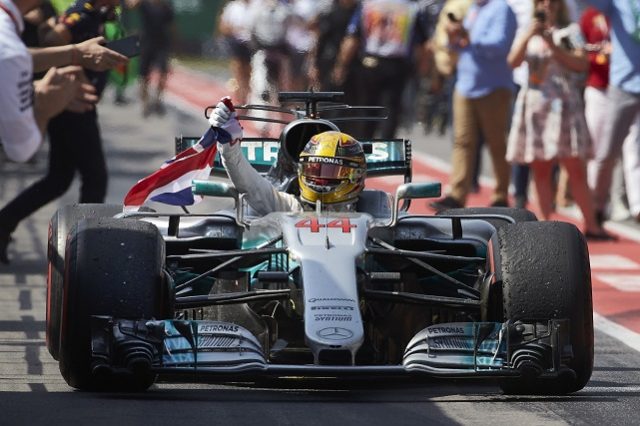 Lewis Hamilton says that he is not looking specifically at equalling Michael Schumacher’s record of seven world championships.

Hamilton is already a three-time world champion himself and took a giant step towards a fourth in Singapore.

The 32-year-old is off-contract at Mercedes at the end of next year and while he has expressed a desire to stay at the time, believes he has “five, six years left in the sport.”

However, he has made it clear that his long-term plans in F1 won’t be affected by whether or not he has the chance to match or even beat Schumacher’s seven titles.

“Currently, it’s quite clear for me. Who knows if we’re going to get anywhere near Michael? Seven championships – I personally don’t have a desire to chase that.”

The Briton did reiterate, however, that he feels he is in his prime and is enjoying F1 “more than ever”.

“I’m enjoying the challenge – the fact we have a balanced car alongside a Ferrari and sometimes a Red Bull, so it’s great to be able to be challenged by another team and really have to play on your qualities and work on your weaknesses.

“But at the end of every season, you always have a think about your future. I set a good five-year plan, but it gets altered every year as you add another year onto it.”

“The wins feel more exciting to try and chase,” said the Briton. “Records are there to be broken, so at some stage someone will break them. Whether it’s me, I can’t tell you.”