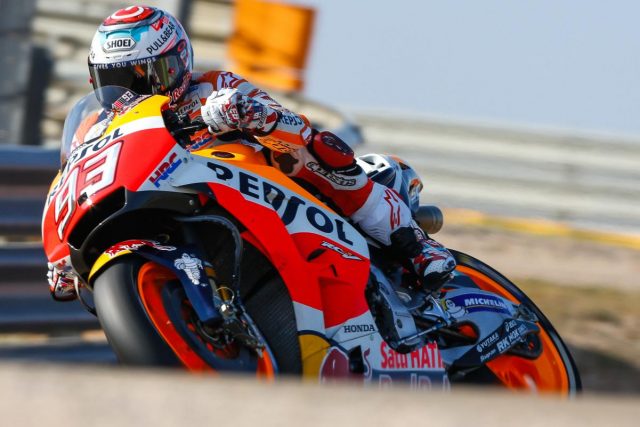 The pair arrived at Round 14 of the season tied at the top of the table but Marquez’s win moves him 16 points ahead of the Italian.

The Repsol Hondas finished one-two with Dani Pedrosa coming home strongly, Jorge Lorenzo got his second podium for the Ducati Team, and Valentino Rossi managed to take fifth despite riding with a broken leg.

Dovizioso (Ducati Team), who had started seventh, and Marquez both got by Viñales at the final corner to run third and fourth at the end of the standing lap.

The Top 4 remained tight but Viñales struggled in the early stages, backing up five bikes behind him.

Marquez passed Dovizioso into the final corner on Lap 6, but had to do it again when he got too keen at Turn 12 on Lap 9.

The defending world champion attempted to pass both Lorenzo and Rossi at once, but ran far too deep and instead lost his position to Dovizioso.

Marquez recovered that position a lap later, and lined up Rossi into the final corner on Lap 12 to move up to second for the first time.

He then began to apply the pressure to Lorenzo, and outbraked #99 into Turn 12 on Lap 16.

Lorenzo tried to hit back almost immediately, but carried too much speed into the final corner and couldn’t make the pass stick.

That shifted the focus to the minor placings, with Pedrosa clearly carrying pace.

The man on bike #26 needed just over 12 laps to get past Viñales, but took an advantage of Dovizioso’s struggles for rear grip to move up to fourth on Lap 15.

Pedrosa passed Rossi a lap later and quickly hauled in Lorenzo as he set the fastest lap of the race on Lap 19 of 23.

The almost inevitable change for position occurred on Lap 21, leaving Pedrosa needing to make up approximately one second to the lead.

Marquez, however, maintained the margin until the end to record his fifth win of the year.

Viñales had found some speed at around one-third of the way into the race, dragging the train up with him, and went on to pass team-mate Rossi for fourth with just under three laps to go.

His result meant a Spanish sweep of the top four in the country’s northeast.

Rossi, who fought hard to try and hold onto that position, eventually crossed the line a commendable fifth.

In the end, Dovizioso had to himself fight to hold off Bautista as they finished seventh and eighth.

Mika Kallio was the top KTM for much of the race but was ultimately classified 11th, while Jack Miller (Marc VDS Honda) finished 13th.

Cal Crutchlow (LCR Honda) and Karel Abraham (Aspar Ducati) were the two non-finishers, both due to crashes.

Championship points: After Round 14