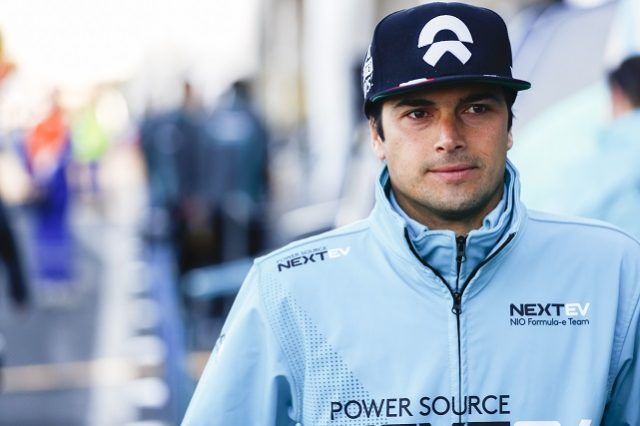 New Zealander Mitch Evans will have Nelson Piquet Jr as his new team-mate at the Jaguar Formula E team in 2017/18.

Piquet, the inaugural Formula E champion in 2014/15, moves across from NextEV/NIO, replacing Adam Carroll at Jaguar.

The Brazilian experienced two unsuccessful seasons at NextEV, finishing 15th in the 2015/16 championship and 11th in the season just passed.

Jaguar has, however, sought Piquet for some time and the ex-Formula 1 driver has also been keen to make the switch.

Piquet stayed with the same team as NextEV took over the Team China entry for 2015/16 but produced a heavy, underperforming twin-motor powertrain.

It continued with that design philosophy for 2016/17 and produced a more potent package, with Piquet claiming his first pole in the Hong Kong opener, but it was an inefficient design and the Brazilian failed to finish on the podium all season.

Piquet described the move as a “great honour”, adding, “Jaguar has such a strong history in motorsport and it’s an exciting time to become part of the team.

“Their commitment to electric motorsport is inspiring and I’m looking forward to working with the team.”

Jaguar team director James Barclay said he was “hugely excited” to sign Piquet and called Evans “one of the outstanding rookies of the season”.

Barclay also said Jaguar’s target was to score points on a regular basis with the I-TYPE 2, which was unveiled at a launch event on Thursday with a new livery.

Evans was handed his FE debut by Jaguar last season as the team opted for two rookies in its first season, and the New Zealander comfortably outperformed his more experienced team-mate.

Thought he could not stop Jaguar finishing last of the 10 teams Evans amassed 22 of its 27 points, and scored a best finish of fourth in Mexico City.

His reward is a second season with the Indian-owned British manufacturer, while it is not known whether Carroll will seek an opportunity elsewhere.

“After such a great season it’s fantastic to be continuing with Panasonic Jaguar Racing in season four,” said Evans.

“As a team, we are moving in the right direction, and I can’t wait for the kick off in Hong Kong.”

Jaguar has also confirmed Ho-Pin Tung will reprise his role as reserve driving for the coming season.