Garth Tander will jump behind the wheel of sprintcar for the first time at Valvoline Raceway next week.

The Garry Rogers Motorsport driver is set to cut laps in a sprintcar campaigned by former Supercars driver Max Dumesny during a season launch for the Sydney venue on Monday.

Tander has been a long time admirer of speedway but has never experienced a car first hand.

The 2007 Supercars champion will follow in the footsteps of V8 rivals Shane van Gisbergen, Lee Holdsworth and James Moffat, who have tested Sprintcars in recent years.

“It all came through Valvoline as they sponsor me, the team, Max and Sydney Speedway, so they put it all together for their launch,” Tander told Speedcafe.com.

“I have got a lot of friends that are involved in speedway and I have been going to watch it my whole life, but I’ve never actually driven a car, so this will be pretty cool.

“I think I will enjoy it. It is just a bit of fun but I will take it seriously too and listen to what Max has to say.

“Hopefully I will get a couple of runs and do a reasonable job.” Tander is set to drive a Valvoline backed Dumesny Sprintcar

Tander and Golding ran solidly inside the top 10 all weekend before a late burst in the final stint saw the former secure fourth, finishing as the top Holden runner.

“We were inside the top 10 all weekend but to come away with fourth, we were reasonably happy with that,” added Tander.

“The car wasn’t great at the start of the race but we tuned it up and it was very strong at the end.

“To come away as top Holden with no real issues, good fuel economy and strategy was a really good job by the entire team.”

The Supercars veteran was particularly impressed by his co-driver Golding, who put his horror crash from last year’s race firmly behind him.

“That was the first time we worked together in battle and he did a really good job. There was a lot of pressure on him given what happened last year,” he said.

“I think he was happy to get that one done so we can now focus on Bathurst and Gold Coast.

“It was a good start to the relationship and it really worked well.”

Focus now switches to Bathurst which will provide an unknown for the GRM team, following confirmation the entire field will a change to the 2016 Dunlop tyre. 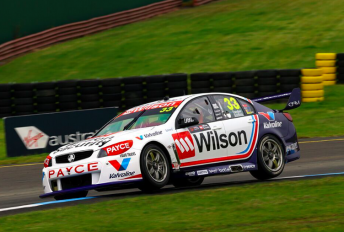 The squad has never run its Commodore on the 2016 specification rubber, but Tander is confident it won’t faze the operation.

“I can’t say what the package will be like for Bathurst as we are going back to the 2016 tyre and I haven’t driven a GRM car on that,” he added.

“GRM also haven’t run a Holden on that rubber, so for us we go there with an open mind.

“We have got a fairly good idea of what we need to do.

“What was vey encouraging is we were the fastest and second fastest cars in pit lane with good fuel economy and pit stops, so going into Bathurst that is important.

“Car speed is one side of the equation which everyone gets wrapped up in.

“Ultimately at Sandown we were ninth and at the end of the race we were fourth, and I only passed two cars on track.

“The work the guys are doing in pit lane is helping a lot.”

Tander has moved up to seventh in the championship standings.