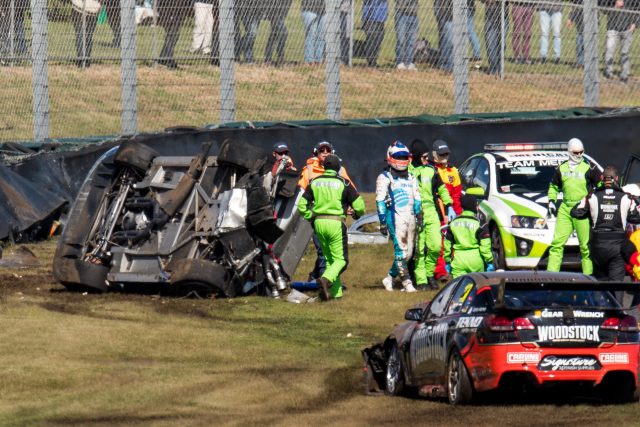 Todd Hazelwood has praised the safety improvements made by Supercars after escaping a horror shunt at the Wilson Security Sandown 500.

The Dunlop Super2 Series title contender was lucky to walk away from a frightening crash that destroyed the #4 Brad Jones Racing Commodore he was sharing with Tim Blanchard.

Hazelwood was tagged by Tekno Autosports’ Jonathon Webb in Saturday’s co-driver race, which resulted in the former being sent into a series of barrel rolls following a heavy impact with the barriers.

The 21-year-old climbed from the wreckage and was declared fit by the medical team to take part in the following Super2 race 90 minutes later, scoring a podium in the process.

However, the heavily damaged #4 BJR Commodore was ruled out of Sunday’s 500km showpiece.

While Hazelwood escaped with bruises, he has heaped praise on championship organisers for constantly improving safety levels of the current specification Supercars.

“To be honest, I’m very thankful for all of those safety improvements that have been put into the cars of today,” said Hazelwood.

“As you mentioned, if you had an incident like that five years ago, or 10 years ago, I probably wouldn’t be strapping in for a race half an hour later.

“It’s a huge credit to everyone involved who’ve made the cars as safe as what they are now.

“I was pretty conscious when I was going off that it was going to be a pretty big one and tried to brace myself in the best way I could.

“I took my hands off the wheel and tried to push my legs as hard as I could on the pedals knowing that it has, recently in the past, been pretty nasty incidents with the legs rattling around.

“The new leg protection that has been implemented for this weekend has done its job.

“I’m very lucky that the HANS device, and the harness, did its job perfectly and was able to walk away.”

While disappointed the crash ended his Sandown 500 prematurely, he has taken some positives for the incident which has now become an internet sensation.

“I think someone said before you’ve had more than 200,000 views on the video in an hour and a half. Look, you’ve got to take the positives out of it, and that’s certainly one of them.” he added.

Brad Jones Racing is well underway with the construction of a brand new car for Hazelwood and primary driver Blanchard for the Supercheap Auto Bathurst 1000.