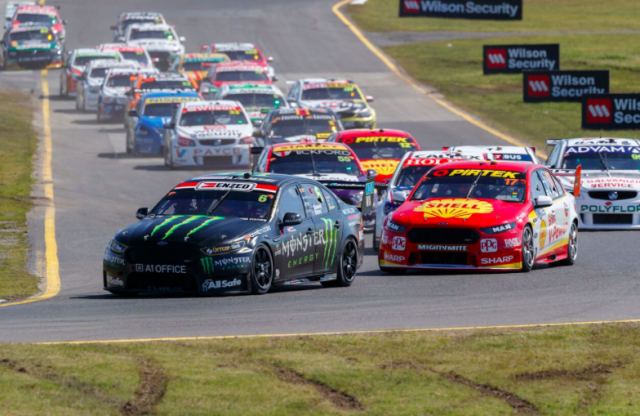 Prodrive leads the pack at the Wilson Security Sandown 500

Prodrive boss Tim Edwards believes a dominant display at the Wilson Security Sandown 500 will bode well for a tilt at the Supercheap Auto Bathurst 1000 next month.

The Ford squad unleashed a raft of upgrades at the Melbourne circuit last weekend for half of its fleet, which coincided with a commanding victory for Cameron Waters and Richie Stanaway.

It is understood the long-planned improvements were centered around engines.

Prodrive has been overshadowed for much of the year by Shell V-Power Racing and Triple Eight, who have split the remaining 16 race wins between them.

However, Sunday’s performance appears to have seen the outfit close the gap to its rivals.

Edwards has downplayed the significance of the upgrades at Sandown, but admits the display at the power circuit should help the team’s Bathurst chances.

“We always have upgrades on our cars going to races,“ Edwards told Speedcafe.com.

“All over the car, and we had it again this weekend, because that’s what we do.

“We’ve always had multiple podiums and we’ve been up there all year, I don’t see it being this big quantum shift this weekend. I think we’ve been there or thereabouts all year.

“Sometimes being aggressive with upgrades can bite you, and it did that at Darwin to us.

“We’re not in this sport to finish second or third or fourth, we want to win races and the only way we’re going to get into P1 is to be as aggressive as we possibly can be.

“Forget about what we’ve changed on the car, just the fact that we’ve had such a strong performance this weekend, of course it bodes well for Bathurst and Gold Coast, and on and on.

“But plenty of things didn’t go right this weekend as well.

“We will debrief and we will analyse all those things that didn’t go right and we will try and fix those for Bathurst.”

Impressed by the team’s performance at Sandown, Waters has praised the efforts to improve the cars ahead of the crucial Pirtek Enduro Cup.

The 23-year-old is excited at the prospect of tackling Bathurst with Prodrive’s enhanced engine package.

“All the guys and girls at Prodrive have been working really hard trying to get our cars a little bit quicker,” said Waters.

“There was a massive push leading up to this weekend to get a few things in the car, they managed to do it and it is just great to reward everyone.

“That is really confidence-inspiring for us to go to Bathurst with that.

“It is all about horsepower there and I think what we have done with the motors – which hasn’t been said much I guess – we upgraded them and the cars were quite quick down the straights this weekend.

“In saying that, the cars were really good as well, it wasn’t just the engines, the engineering department have done a amazing job to make sure we have got quick cars, and the engine shop has done a good job.

“We’re really confident going to Bathurst with a genuine shot to win.”

The squad will head to Mount Panorama next month for the Bathurst 1000 from October 5-8.