Turn 6 in spotlight after Sandown shunts

Turn 6 in spotlight after Sandown shunts 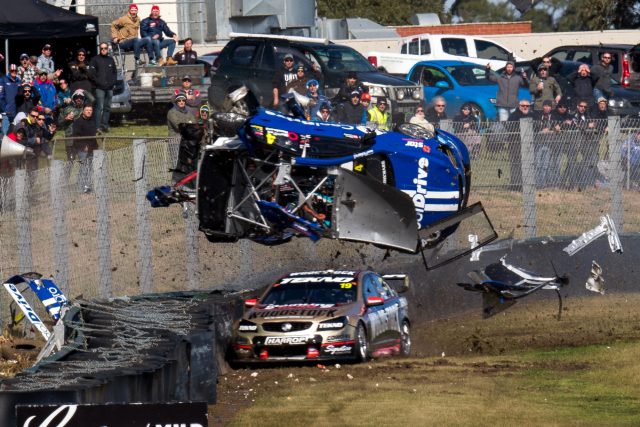 The high-speed Turn 6 at the historic Sandown Raceway has been called into question after a series of heavy crashes over the weekend.

Sunday’s Wilson Security Sandown 500 was suspended for an hour following a shunt at the corner for Lucas Dumbrell Motorsport’s Taz Douglas.

Douglas suffered a puncture after earlier contact which left him powerless to avoid a heavy impact with the barriers, which required extensive repairs.

The impact forced officials to red flag the race for the second year in succession due to a crash at the corner in question.

Last year James Golding found the wall after suffering a puncture in a similar incident to that of Douglas.

The LDM driver wasn’t the only competitor to find the wall at Turn 6 as Todd Hazelwood was lucky to walk away from a frightening airborne crash during Saturday’s co-driver race, following contact from Jonathon Webb.

While all three drivers emerged unscathed from the incidents, questions have been raised regarding the safety and design of the Turn 6 run off area.

Triple Eight team owner Roland Dane believes changes should be made to limit the length of race stoppages incurred to rebuild the barriers.

“Look, there probably should be changes to the track given the issues that have been there over the years, just to make it so that you haven’t got race stoppages,” Dane told Speedcafe.com.

“It’s not the first time this has happened. It absolutely needs some work on it.”

Edwards believes the correct procedures were in place to ensure safety remains paramount for the category and the circuit.

“I think the stoppage demonstrates that safety is our number one priority because it would be very easy to just shove those tyres back into place and go racing five minutes later,” Edwards told Speedcafe.com.

“But because safety is paramount they do make sure that they put the whole tyre wall back into place properly, the right number of tyres, the right conveyor belt, the right strapping, and it all takes time.

“I think we’ve demonstrated that safety is the priority. We’re always going to have cars having accidents.

“I think it demonstrates that the circuit has got the right amount of safety up there.

“We might have crashed some cars, but the fact is everybody’s been able to walk away because it’s got the right number of tyres and the right impact absorption.

“It’s something CAMS work hard at because they’re responsible for track safety.

“While we tore up some stuff the reality is everybody got out of it unscathed, and we took the time to repair it properly before we went racing again, so I think we did everything right.”

Golding, who escaped a high-speed crash at the corner last year, believes there is little that can be done to improve the corner.

“Sandown has been like this with this design for a long time now, and it’s claimed a lot of cars up there,” Golding told Speedcafe.com.

“You can’t really do too much in terms of really the structure of the corner I think.

“It’s such a high speed area if you put the wall back 10 metres, you’re going on grass, you’re still going to slide and hit it at an incredible rate of speed.”

The last two editions have failed to reach the scheduled 500km distance due to lengthy red flag periods.

“I feel like it, for the shunts we had, I think everything did its job,” said McLaughlin, when asked about the circuit’s safety.

“Probably one thing is we need to look at that timetable in our category to think about making this a full 500 kilometres, I mean, it is two years in a row it hasn’t been reached.

“We are not giving our fans a full show and we are in the entertainment business. It was pretty disappointing that we can’t do that.”

McLaughlin extended his championship to 84 points after finishing second in Sunday’s race behind winners Cameron Waters and Richie Stanaway.