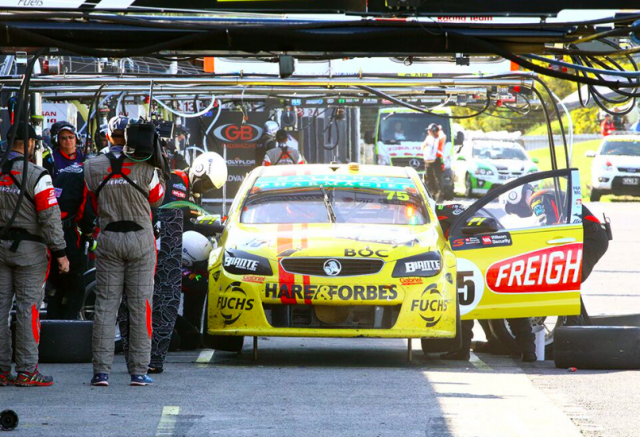 The #75 Brad Jones Racing car has been excluded

Stewards have excluded Tim Slade and Ash Walsh from the Wilson Security Sandown 500.

Regulations dictate drivers must log a minimum of 54 laps and minimum resting time of the same period which the entry has broken according to the stewards. Drivers must not complete more than two thirds of the race distance.

Co-driver Walsh started the race and completed two stints (85 laps) as the Albury team operated an alternate strategy which proved fruitful having been turned around on the opening lap.

The pairing stopped during the early Safety Car and was therefore able to make it home on just two more stops.

Tim Slade took over the car from Walsh at the end of lap 86 ensuring he completed the 39 lap run to the chequered flag in what was a time certain finish after an hour long suspension.

The regulations in question read as the following;

“8.4.6.1 the total driving distance for each Driver must not exceed two-thirds (2/3) of the scheduled race distance; and

“8.4.6.2 the total effective resting time for each Driver must be equal to at least one-third (1/3) of the scheduled race distance.

“8.4.6.3 the scheduled race distance will always be considered as the number laps listed in the Supplementary Regulations, irrespective of a time certain finish being referenced and/or applied unless, at the sole discretion of the Stewards, a reduced distance is necessary.”

A stewards report rejected an interpretation from Brad Jones Racing that both its drivers had abided by the rules stipulating the maximum driving time or continuous time behind the wheel.

The exclusion marked a disastrous weekend for the team after its #4 entry failed to make the start following a horror crash for Todd Hazelwood on Saturday, while Nick Percat and Macauley Jones were the last of the classified finishers.

See below for updated Sandown 500 race results and championship points